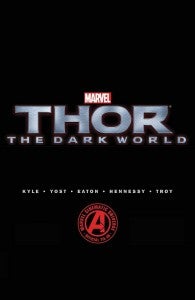 • An all-new adventure leading you directly into the upcoming Marvel Studios blockbuster THOR: THE DARK WORLD! • What happened to your favorite Asgardians between the events of THOR and THE AVENGERS? What comes next? Find out here! • Thor! Loki! Odin! Heimdall! Jane Foster! Sif! The Warriors Three! All this, brought to you by the powerhouse creative team of writers Craig Kyle (THOR: THE DARK WORLD executive producer) and Christopher Yost (THOR: THE DARK WORLD co-writer) and artist Scot Eaton (CAPTAIN AMERICA)!