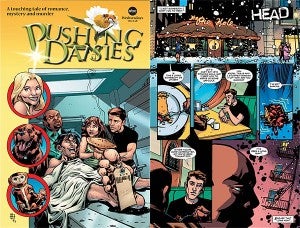 While it would likely take much more than $2 million to get off the ground, Pushing Daisies creator Bryan Fuller is apparently considering the merits of trying to crowdfund a continuation of the cult TV series, inspired by Rob Thomas's record-breaking Veronica Mars Kickstarter. "I did get an email from Bryan Fuller earlier today saying, 'Hey, can you jump on the phone with me at some point? I know you're busy, but I would love to talk to you about how this thing works.' And I know it was specifically for Pushing Daisies," Thomas told HitFix in a feature about the Veronica Mars campaign. For Fuller's part, he's got a bit of a full plate right now; the former Wonderfalls and Heroes producer is showrunning Hannibal, NBC's upcoming revamp of the Silence of the Lambs franchise for TV, following on an unsuccessful attempt to bring back The Munsters with Mockingbird Lane. Pushing Daisies, which at one point was set for a comic book continuation that's now been in development since before the series was cancelled on TV, is a bit more elaborate than Veronica Mars; utilizing a lot more in terms of special effects, makeup and visual effects, it's hard to imagine doing it right on the cheap. "I said to my agent immediately, 'Can we do this with Pushing Daisies or Wonderfalls?'" Fuller admitted to The Hollywood Reporter. "And he said, 'Pushing Daisies is going to take a lot more than $2 million to make into a movie'." The film's estimated $10 million minimum budget would likely be near-impossible to raise by crowdfunding alone--or at least seems that way. Last week, few would have guessed $2 million was an easy get. Ironically, both Pushing Daisies and Veronica Mars were named as series that ComicBook.com thought should be continued as comic books.

Veronica Mars Creator: Pushing Daisies Could Be Next for Kickstarter