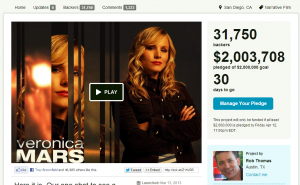 After raising the required $2 million in less than 12 hours, Rob Thomas's feature film adaptation of his cult hit television series Veronica Mars will head into production this summer for a targeted spring 2014 release. As of this moment, the project is more than $21,000 past being funded after having accumulated support consistently throughout the day and then surging in the last 15 minutes or so since it became clear that the film would be successfully funded tonight. With over 30,000 backers, the average pledge right now is about $63 per backer, and the film is officially the most-funded film/video project ever made. Throughout the day, there's been a great deal of discussion about what the Veronica Mars Kickstarter "means" for established media; when David Fincher took to Kickstarter just months ago to fund The Goon or Top Cow brought their free Cyber Force comic to the crowdfunding site, there were complaints from some segments of the fan community who felt that it wasn't the domain of those with money to seek out funding from those who had none. Kevin Smith, when he briefly flirted with the idea of crowdfunding for his film Red State, was shouted down so loudly that he later had to make clarifying statements even though he didn't even venture onto a crowdfunding site. Veronica Mars was the fastest Kickstarter program in any category to hit $1 million and will likely be the fastest ever to hit $2 million, as well. Typically, campaigns slow down after they've reached their goal, and also slow down after the hardcore fans get in on the game in the first few days, so don't expect this to raise $60 million in the next month--although anything certainly seems possible for Kristen Bell and company at this point.

Veronica Mars Movie is Happening After Raising $2 Million in Hours