Marvel's Guardians of the Galaxy Vol. 2 opened in theaters this weekend and came attached with a record five post-credits scenes.

One of those post-credits scenes left audiences clearly divided between comic book readers and non-readers. In the scene, Ayesha, the High Priestess of the Sovereign, looks haggard and speaks to another of the sovereign about a project she has undertaken. The camera shows a cocoon and Ayesha decides she will name the being inside "Adam."

For those familiar with Marvel Comics history, the name "Adam" and the cocoon signal the Marvel Cinematic Universe Debut of Warlock, or Adam Warlock depending on how the mood strikes him, a powerful character with ties to Thanos and the Infinity Gauntlet.

For those who aren't familiar with Marvel Comics history, ComicBook.com is here to explain why everyone else in the audience was so excited about that scene.

Adam Warlock was originally simply known as "Him" and was created by Jack Kirby and Stan Lee in the pages of Fantastic Four.

Him was created at a research facility called the Beehive by a secretive group of scientists called the Enclave. Him's creators wanted to design and exploit the perfect human being. The Beehive grew Him in a cocoon similar to the one in the Guardians of the Galaxy Vol. 2 post-credits scene.

What his creators didn't know was that Him could sense their plans and intentions while he was still in the cocoon. When Him finally emerged, he lacked any semblance of maturity or restraint and lashed out and killed his creators.

Him left the Beehive, but he was unable to properly assimilate into human society. He eventually tries to force Lady Sif to become his mate, which leads to a conflict with Thor. After being defeated, and believed dead, Him left Earth to travel the stars.

The Enclave would later try the experiment again, this time creating a female being. This being is Ayesha, who is Adam's genetic twin in the Marvel Comics universe. The Sovereign's obsession with genetic perfection in Guardians of the Galaxy Vol. 2 seems to be a call back to the enclave's goals, and Ayesha's involvement a nod to her comic book connection with Adam.

Thomas and Kane changed Him's name to Warlock, and later gave him the first name Adam.

The High Evolutionary also gifted Adam the Soul Gem, one of the powerful Infinity Gems that are the equivalents of the Infinity Stones of the Marvel Cinematic Universe.

Warlock's tie to the Soul Gem is interesting because the Soul Stone is the one Infinity Stone still unaccounted for the Marvel Cinematic Universe. Some have speculated that one of the Asgardians, perhaps Odin or Heimdall or even Hela, possesses the Soul Stone. Others have theorized that it could be hidden in Wakanda. 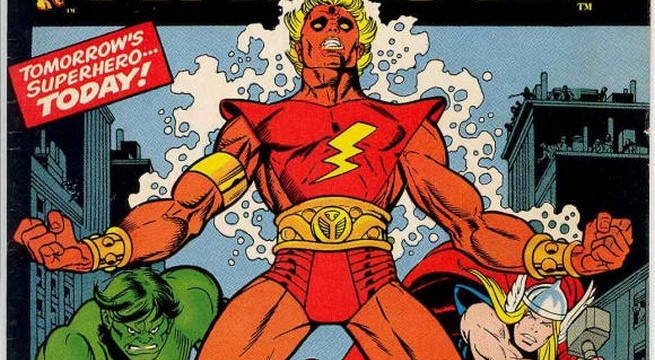 From the time that Adam Warlock came into possession of the Soul Gem, his story has been intertwined with that of Thanos.

Thanos's enmity towards Adam Warlock is partly due to the existence of Magus, a version of Warlock from a divergent timeline that was driven insane by Lord Chaos, Master Order, and the In-Betweener in a misguided attempt to create a Champion of Life to oppose Thanos.

The Magus was sent back 5000 years in time, where he began the fanatical religious organization called the Universal Church of Truth.

Warlock would come to be a constant thorn in Thanos's side, rallying other cosmic heroes to foil Thanos's plot to snuff out all of the stars as a gift to Mistress Death. This could, perhaps, hint at a role for Adam in Avengers: Infinity War or Avengers 4.

It is also worth keeping in mind that Ayesha's title is High Priestess, which perhaps hints at a future coming of the Magus and the Universal Church of Truth in the Marvel Cinematic Universe.

Adam and the Infinity Gauntlet

The main event in the rivalry between Warlock and Thanos was the Infinity Gauntlet event series.

Infinity Gauntlet saw Thanos united the Infinity Gems in the titular cosmic weapon and it was Adam Warlock who rallied the Marvel heroes to oppose Thanos's plans.

With the Infinity Gauntlet on his hand, Thanos was all-powerful. Warlock devised a plan: to have the Marvel heroes launch a coordinated attack against Thanos as a distraction while the Silver Surfer raced from the other side of the cosmos in an attempt to snatch the Infinity Gauntlet right off of Thanos's hand.

The plan failed, but the Infinity Gauntlet eventually changed hands through a series of events. It passed briefly to Nebula before finally falling into the hands of Adam Warlock himself, who brought the conflict to its end.

Adam of the Infinity Watch

Warlock then formed the Infinity Watch, a group of individuals whose mission was to each safeguard a single Infinity Gem left in their possession and prevent them from ever being used together again.

Warlock himself maintained possession of the Soul Gem. He trusted the Time Gem to Gamora, the Power Gem to Drax, the Mind Gem to Drax's daughter Moondragon, and the Space Gem to his old friend and traveling companion Pip the Troll, who Peter Dinklage is rumored to be playing in Avengers: Infinity War.

The Reality Gem was left in the custody of a secret sixth member of the Infinity Watch whose identity was kept secret from the other members of the Watch. This sixth member was Thanos, who had been humbled by his experience gaining and losing infinite power.

The Marvel Cinematic Universe will have to deal with the known existence of the Infinity Stones and the Infinity Gauntlet following the events of Avengers: Infinity War. The idea that the Stones are too powerful to be kept together has already been introduced in Thor: The Dark World. The Infinity Watch is the natural next step in that idea, perhaps suggesting Warlock's future role in the MCU.

Adam, Guardian of the Galaxy

The Infinity Watch eventually lost their stewardship of the Infinity Gems and disbanded. Warlock spent time wandering the cosmos and acting as Thanos' conscience before eventually retiring to a life of solitude.

He was called out of this solitude when Ultron began sending a Phalanx army to raze the galaxy during the events of Annihilation: Conquest. Moondragon and Quasar sought out Warlock's aid in fighting back, and he agreed. With the help of several other cosmic heroes, including Star-Lord, Warlock played a role in confronting and defeating Ultron.

When Star-Lord revealed he was planning to keep a team of heroes together as the Guardians of the Galaxy, Warlock supported him and joined as a founding member of the team. Together with the Guardians, Warlock once again faced the Magus and the Universal Church of Truth.

Though Warlock later returned to his role as a cosmic traveler and Thanos's opposite number, his time with the Guardians suggests a future with the cinematic version of the team.

More Guardians of the Galaxy Vol. 2

Guardians Of The Galaxy Vol. 2: Who Is Adam?