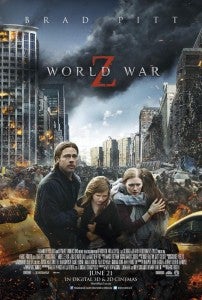 In its second week of release (although its first in a number of territories), World War Z has proven its staying power by overtaking Monsters University and Man of Steel to become the #1 movie outside of the U.S. Last week, Monsters University came in at #2 and Man of Steel took the top spot--but as the Superman reboot and the Pixar hit both opened in only a few small new markets this week and World War Z expanded its reach comparable to what Man of Steel did last week, the Brad Pitt vehicle widely expected to collapse under its own weight has proven to be a cash cow for Paramount. With a sequel on the way and strong international numbers, everything seems to be coming up Milhouse for the PG-13-rated horror flick...but remember that it cost $220 million or so to make--that's as much as Man of Steel, which had about $100 million more in the till at this point in its run than does World War Z and currently sits at around twice what Marc Forster's zombie drama has earned ($520 million worldwide versus $263 million). Factoring in promotion budgets, and the fact that they had already started promoting the movie last year before delaying it to reshoot, you've got a long road to making the movie truly profitable...but the hard work of laying the foundation for a franchise is done and now they can focus on making a cheaper sequel that will likely, given the nature of the market right now, make more money. It does, have something going for it on that score. By the time the film is starting to look like its run has been finished later in the summer, it will open in Japan--giving it the same kind of late-in-the-game bump that Marvel's The Avengers enjoyed last year. Paramount, who distributed World War Z, also had a financial interest in The Avengers.