Fox released a brand new trailer for X-Men: Days of Future Past earlier today. While most fans are likely going to watch the trailer, we did want to warn there is a huge potential spoiler in the trailer. The article below also contains spoilers for the comic series, which most fans have likely read by now, since it was published more than thirty years ago. If you don't want to watch the trailer or know the potential spoiler, then stop reading now. The second trailer for X-Men: Days of Future Past was released earlier today. One of the most interesting moment featured Storm in the distant future, being ambushed by a sentinel.

Is this the end for Storm? The scene certainly seems to be paying homage to one of the closing scenes from the original "Days of Future Past" comic book story. Here's the panel from Uncanny X-men #142. 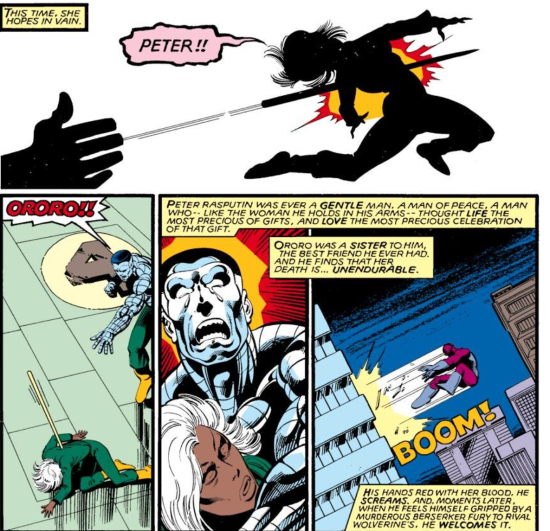 Storm, in the future, is impaled from behind by a sentinel, pretty closely resembling what the sentinel in the trailer seems to be planning. It seems like a pretty easy way to up the stakes in the film, especially since, as an alternate future story, Storm should live again if the good guys win and avert the future in which she dies altogether. Perhaps this also explains the rumors that Halle Berry had been largely cut form the film, which Bryan Singer has denied. Maybe she wasn't cut out of the film after the fact, but simply dies in the film as planned. The ultimate X-Men ensemble fights a war for the survival of the species across two time periods in X-Men: Days of Future Past. The characters from the original X-Men film trilogy join forces with their younger selves from X-Men: First Class in an epic battle that must change the past - to save our future. X-Men: Days of Future Past comes to theaters May 23, 2014.

X-Men Days Of Future Past Trailer: Does [Spoiler] Die?