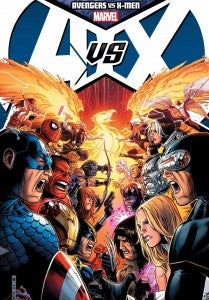 Could Avengers vs. X-Men be coming soon to a theater near you? It's not likely, but a smaller-scale co-mingling of the Fox X-Men franchise and Walt Disney Studios's Avengers films might be in the offing, after Laura Shuler Donner--producer on the X-Men movies--told Crave Online that she would like to see her characters appear in an Avengers film. Asked if she can imagine the two franchises crossing over, with her characters appearing in an Avengers film, Donner answered, "I would love it. I would love it. I personally have close ties to Marvel because of [Marvel Studios President] Kevin Feige, because Kevin worked for me. But to take our characters and mingle them in the way that they were written, yeah, absolutely." This would likely side-step most of the obstacles that would be involved with an Avenger appearing in a non-Disney movie, since in a perfect world Disney probably would obviously prefer it if one day the rights to all of Marvel's characters revert to them as Daredevil's will on Wednesday. The fact that they own the characters is probably a huge impediment to their own characters appearing in other people's films, but if they can find a way to incorporate the other studios' films into their own universe, it's not unlikely Marvel will take advantage. There was, at one point, an attempt made to finish The Amazing Spider-Man's production design early enough that they could use Oscorp Tower in the New York skyline of The Avengers, remember. Donner also noted that X-Men: Days of Future Past is still chugging along. "Not quite fast enough but it's coming along," she explained. "We have a great treatment and we're just waiting for the screenplay." Avengers vs. X-Men has been one of the consistent top sellers in comics for the last six months, in spite of criticism by some fans and retailers that the project felt like a blatant cash grab. The Avengers was one of the highest-grossing films of all time, in no small part because of the huge appeal to non-comics-reading moviegoers in seeing so many of their favorite characters onscreen together. It seems like basic logic that an X-Men appearance in a future Avengers film would be just the thing to reproduce that kind of shock to the Marvel Cinematic Universe's system, especially given the fact that they've already got a story for Avengers 2, meaning that it'll be at least a third film before Marvel Studios could even consider it.

X-Men Producer Donner Would Love to Cross Over With Avengers