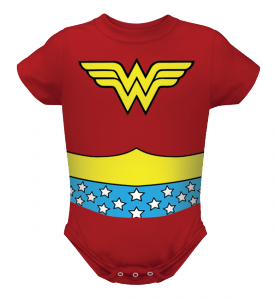 Our friends at SuperHeroStuff recently sent me a little package in the mail, and asked me to take a look at their products for them. Consider them the article's sponsor.

It was actually all stuff that I'd been meaning to pick up for some time, and hadn't, because like most reporters, I am destitute. But getting a package for free? That's a good thing.

(If you like the items in question, click on the image of the item and it should take you right through to the page to buy them. If you want to look for some other stuff, there are links at the foot of the article.)

I've got two kids--an infant girl and a toddler boy--and so they sent me a Wonder Woman onesie for Samantha and a Blue Beetle t-shirt for Daniel (because they don't make Booster Gold t-shirts for kids that age). I grabbed one of the Action Comics #1 t-shirts for me, because I'm one of those people who can't seem to get over my irrational enthusiasm for the New 52, even now that it's started to burn me in a few key ways.

How'd they like it? Well, Sammy swam in her onesie, as the options are 0-6 months, 6-12 months, and I've got a child who fits squarely into that non-existent 6-9 month size. That said, one of the things you'll find with these licensed pieces of baby wear is that often, they're made on the cheap. The brand SHS carries is actually quite nice, soft and seems likely to hold up--which is nice. One of the upsides to going through a specialty shop like them is that if you go to Amazon, you can find dozens of Wonder Woman onesies, probably including some in Sam's exact size, but you have no real idea what the quality will be when it gets to you. I had my doubts before it showed up, but having had one good experience, I'll probably order some more because baby stuff is such a small part of the market that I figure it'll all be comparable. 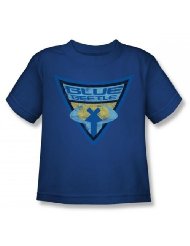 My son's t-shirt wasn't as much of a concern--he's older--but it was actually a little bit of a question when it arrived. They come heavily starched and you want to wash it before you put it on a small child, but once it came out of the dryer, it was perfect.

While both the baby stuff and the grown-up stuff run a little big, the kids' stuff is basically right on the money, so don't take what I say about the onesie as a sign that you can downsize on this. The toddler shirts have that thing where they're made for shorter bodies and so they look very different (even in the photo at right).

It's worth noting that while the Wonder Woman onesie is pretty much just a onesie, both of the other two shirts go the route of the "distressed" look and feel that's pretty evident from looking at the Blue Beetle logo there--it works nicely, especially on the kids' clothes, becuase the cotton is so soft underneath. The one and only odd surprise was... 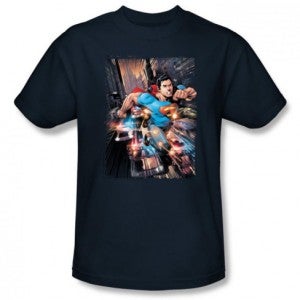 The Superman t-shirt was like that, too. The thumbnail looked black to me (although now that I know what it actually looks like--it's navy--that was probably my fault), and the cover itself looked brighter and more vibrant than it came back as. Many fans, having seen these shirts at conventions or comic shops, probably knew that already but it was a bit of a surprise for me when I opened the box.

The distressed look is actually probably better for old guys like me, who tend not to wear anything that's too openly a t-shirt meant for teenagers outside of the house, but be aware when you order and e-mail the retailer if you've got questions. It's hard to say whether this is something that goes through the whole line of the New 52 #1 t-shirts or isolated to Action Comics #1, which is an image that just begs for "vintage" treatment given the Golden Age Superman look and feel of Morrison's title.

Some general-purpose links for window-shopping:

A DC Comics "Family" of Products