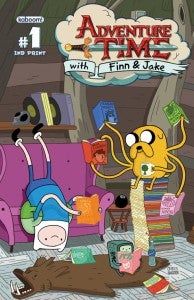 Yesterday, Boom! Studios announced that their new all-ages titles, Adventure Time, had sold out at the distribution level yesterday before copies hit the shelves next week. Today, Image Comics has announced that Alpha Girl, its new zombie adventure title, has done the same. Adventure Time, based on the Cartoon Network series, is written by Ryan North with art by Shelli Paroline and Braden Lamb. The series follows Finn the Human, Jake the Dog and Princess Bubblegum on their adventures through the land of Ooo! The second printing is already available for order through Diamond Comics Distributors and will ship with a new cover. Alpha Girl #1 by Jean-Paul Bonjour and Robert Love has also sold out, although as of yet Image has not made any information available on the second print. The title follows the efforts of Judith, the planet's lone surviving woman after a makeup-related zombie holocaust, as she endeavors to rescue her little brother. "We sold out? Finally, I have something in common with Jay-Z!" joked writer Jean-Paul Bonjour in a press release issued by Image. "In all seriousness though, I am so stoked for everyone to see Alpha Girl, and so appreciative of the retailer support." "Wow! I've been in this business since 1998 and I've never been involved with a sell out," added artist Robert Love. "I work with the best people that had a solid vision that made this possible." Image also sold out Fatale #2, out today, and announced yesterday that it would go back to press along with a third print of that series' first issue.