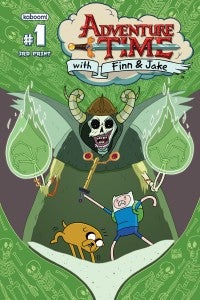 All day long, comics publishers have been touting their sold-out wares going back for further printings. First thing this morning, Boom! Studios sent out a press release announcing that Adventure Time #1 by Ryan North, Shelli Paroline and Braden Lamb is headed back to presses for a third print after the first two sold out. Featuring a new cover by Chris Houghton, the issue is available right now for reorder from comics retailers through Diamond. Based on the Cartoon Network series, Adventure Time #1 appears from the press release to be the first Boom! title to go to a third print. 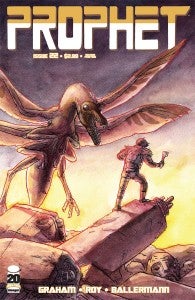 Also returning for a third printing from Image Comics is Ed Brubaker and Sean Phillips's Fatale #2 from Image, with the series' first issue heading back for a fourth time around. Along with that acclaimed noir thriller series, Image's recent relaunch of Rob Liefeld's Prophet, written by Brandon Graham with art by Simon Roy, has been lighting up sales charts as well. The first issue of the relaunch, #21, went back for a second printing last month just before it was officially released and now #22 is doing the same thing. That issue, too, will come back soon with a new cover. All three of the Image reprints will be in stores on March 21, 2012--the same day that Prophet #23 hits the stores. And then on top of it all, DC Comics announced that Justice League #1 by Geoff Johns and Jim Lee, the best-selling single issue of 2011, is headed back to press yet again for a seventh printing this month. That book, too, will hit the stands on March 21...which is this writer's birthday, and I'd happily accept a copy of any of these books as a gift from our loyal readers. UPDATE: DC Comics has just announced that Suicide Squad #6, the first part of the "Hunt for Harley Quinn" storyline, will return to press for a second printing as well. The issue will arrive in stores on March 21 as well.

Adventure Time, Justice League, Prophet and Fatale All Back for More [Updated]