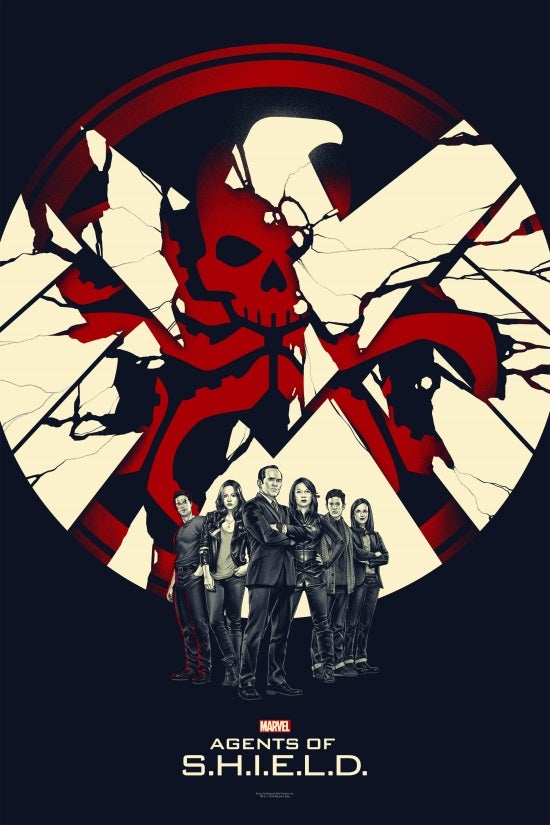 The episode opens with a man giving another person a tour of Cybertek. The man asks the new employee why he’s here, and the new employee says the “incentive program.” The man says no one has turned that down yet. A woman tells the man, named Zeller, that “they’re in position.” He points to a screen with Coulson and his team and tells the people to let them have it.

Coulson’s team goes into battle with the Cybertek soldiers while Skye downloads their info. May gets ahold of one of the berserker staffs and begins destroying the whole basement, bringing the roof down, literally.

Zeller informs Garrett of what happened. Garrett says it doesn’t matter and pulls a door off its hinges in the Bus, displaying superhuman strength. Ian Quinn is upset that Garrett used all of their miracle drug. Raina says that working with Hydra means they’ll always have volunteers for research, and their “incentive program” will bring in more. Garrett draws something on the windows of the door while and Ward asks if they need to stay associated with Hydra now that they’ve achieved their goal. Garrett says this is bigger than Hydra’s uprising now and promises Ward whatever he wants for his loyalty.

Coulson informs the team that Fitzsimmon’s tracker is on the Bus, but that Fitz and Simmons aren’t answering their call.

Fitz and Simmons are in their chamber, sitting at the bottom of the ocean. Simmons wakes up. Fitz explains that the containment chamber is designed to work with all S.H.I.E.L.D. vehicles, including submarines, which is why they sank. Simmons is glad to hear of their good fortune, but Fitz explains to her just how hopeless they are.

Ward is telling Raina that he’s worried about how weird Garrett is acting. She goes to talk to Garrett, who is examining the gravitonium. Garrett explains that the GH 325 didn’t just repair him physically but opened his mind to see the world underneath. Raina says she has no loyalty to Hydra, she’s only interested in evolution. She says she was saddened to learn Garrett wasn’t actually clairvoyant because she had a question she wanted answered. With his new power Garrett will be able to answer and tells her to ask. She want to know what she will become.

Fitz and Simmons are still at the bottom of the ocean, trying to comfort each other as they face imminent death. Fitz recalls his mother saying that death is just like before you’re born, which isn’t so bad. Simmons recalls her father always remembering how energy is not destroyed, it just changes and that they will be absorbed into something else. Examining the glass, Simmons releases they might be able to blow it out.

Ian Quinn is giving some military brass a tour of Cybertek’s Deathlok program. He wants to build a dozen machines to build hundreds of Deathlok soldiers.

Coulson and Trip are scouting the area for a target. Trip tosses a noise-maker to distract a group of guards and they take advantage by stealing an armored truck and running through the compound’s gate. They fire a missile into the wall to let Skye and May inside.

The alarms are going off inside Cybertek. Quinn is trying to calm down the military personnel, but Garret, Deathlok and Ward come in. Ward demands that the military give them everything they want and that Garrett has seen a new future. Garrett agrees to give them a demonstration. He kills one of the men by putting his hand through his chest. Garrett says this is the beginning. Ward asks, “The beginning of what?” Garrett says, “The end.”

Ian Quinn and Raina are packing up to leave with his gravitonium. Ward is furious and trying to stop them, but Raina believes in Garrett now. She tells Ward that Skye is an important part of the evolution that Garrett sees. She tells him to go get her. He says that he’s a monster and Skye hates her. Raina asks if that’s really Ward’s nature or what Garrett made him. Ward says he doesn’t know.

In the outer area of Cybertek, more and more soldiers are crowding on Coulson and Trip’s position. May tells Coulson they found the dealer. Skye walks in and declares she has a bomb. Zeller switches the soldiers to default directive, which is to defend Garrett at all costs. They stop attacking Coulson and start leading him to Garrett.

Ward demands orders from Garrett, but he says it’s up to Ward to decide. Garrett gets a call from Deathlok’s handler, but it’s Skye. Garrett orders Ward to go get Skye.

Fitz and Simmons are setting a way to blow the window. Fitz explains that Simmons will need some air to get up to the surface, but there’s only enough for one of them. He begs her to take the air and admits that she means more to him than he’s told her. She protests, but Fitz blows the window. Fitz goes unconscious but Simmons drags him with her as she swims up to the surface, where she finds Nick Fury waiting for her.

Simmons is inside a decompression pod on a jet. Fury tells her that Fitz is still alive, barely, and is with a medical team. Fury found them thanks to their makeshift beacon. He saw it because he was looking for Coulson.

At Cybertek, Skye has strapped the bomb to Zeller. She wants to know why Zeller is so loyal to Hydra, asks if it’s the incentive program. Ward shows up and puts her at gunpoint. Ward says Skye and he are alike. Skye says Ward isn’t evil, just weak. May jumps out and attacks Ward.

Garrett hears another noisemaker and sends Deathlok after it. Coulson sneaks up and punches him. Garrett sends Coulson flying with one punch. Coulson lands and when he looks up he sees Fury. Fury gives Coulson an impressively large gun, which he uses to take out the Cybertek guards before it loses power. Fury unloads a pistol on Garrett, but he takes the shots and heals. Deathlok returns to the room with Garrett, Coulson and Fury.

May and Ward continue to fight until May nails Ward’s foot to the floor and then knocks him out.

Skye uncovers the “incentive program:” hostages held by Cybertek to force people to work for them. She frees Zeller’s wife and Michael Petersen’s son. She’s hacked their system and is communicating with Deathlok. She sends a message to let him know that his son is safe and he turns on Garrett, firing at him with a missile. Deathlok finishes him off, stomping on his skull.

Garrett is boxed up. Coulson explains that the Cybertek soldiers will be fine once their cybernetics are removed. Ward is taken into custody.

Deathlok is watching his son from afar. Skye asks why he doesn’t go to him, and he says that he doesn’t want Ace to see what he’s become. Skye says Coulson wants her to bring him in, but Deathlok goes on his own to continue fighting for Ace.

Garrett wakes up. He has cybernetic enhancements installed and begins claiming he will be unstoppable…until Coulson blows him up.

Coulson is yelling at Fury about bringing him back from the dead. Coulson says the project was to bring back an Avenger, and Fury says “exactly.” Fury says that, before S.H.I.E.L.D. was torn apart, guys like Coulson were its heart. He says that Coulson will now be its head and gives him a black box he calls a Toolbox. He wants Coulson to rebuild S.H.I.E.L.D. Coulson become the director of the new S.H.I.E.L.D.

Simmons rejoins the rest of the group. Skye asks about Fitz. Simmons says only that he’s alive. Agent Billy Koenig, Eric’s brother, shows up and says the place they’ve come to is the Playground, where they’ll get back to fighting the good fight. He asks Coulson where he would like to start.

Raina is walking through a dark alley. She enters a room and gives a man a picture of Skye. She says that she found his daughter. The man’s hands are bleeding from large open wounds.

Coulson is lying in bed. He gets up and goes into a storage room. He sees the drawing that Garret made on the door. He takes a knife and begins drawing on the wall, something that looks similar to what Garrett did but even larger.

Agents of S.H.I.E.L.D. Season Finale: The Beginning Of The End Recap With Spoilers