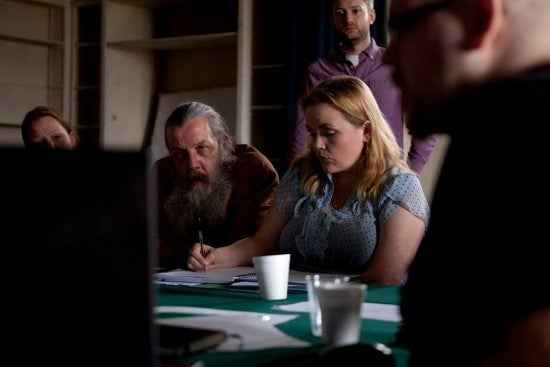 Comics legend Alan Moore, supported by his daughter Leah Moore and her frequent collaborator John Reppion, will make his first major foray into digital comics with Electricomics, a new app launching tomorrow, Bleeding Cool reports. Details are scant, although the photo above is part of the project's official Facebook page and the company's motto is that they are "Not so much pushing the envelope of comicbook storytelling as folding it up to make a nice hat." Classified as an app and listed with a release date of tomorrow, the social media page for Electricomics also lists a website that you can visit, which will presumably carry more information then and from where you can find Tumblr and Twitter accounts for the project.

Moore, estranged from nearly every major comics publisher in the U.S. for various reasons, has been working primarily in the self-publishing (or at least creator-owned) sphere for years, but has yet to move to digital distribution for much of that content (some of his work comes available via the publishers and distributors, but it's case by case). Now, though, may be an ideal time for an upstart digital comics app to make a move, considering fan and industry frustration with recent strategic moves by Amazon's ComiXology platform. Leah Moore and John Reppion have also worked in self publishing, but have just as often gone to venues like Dynamite Entertainment for both creator-owned and licensed work, including the best-selling Sherlock Holmes comics they did there. More information should be available tomorrow around the time the app launches; we'll have it here as soon as we know what "it" is.

Alan Moore and Others To Launch Electricomics App