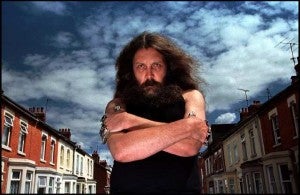 This weekend, veteran comics writer Alan Moore appeared at the Northants International Comic Expo (N.I.C.E.), his first comic convention appearance in many years, in support of the Northampton public libraries. He held court at an hour-long panel, announced a new series with Avatar, and answered questions from the audience, all captured by Tom Huxley, a writer for Bleeding Cool, who uploaded it to his personal YouTube page. Among the highlights was some discussion of Moore's craft, his personal history with comics, and the influences of everyone from Will Eisner to Rob Liefeld (whom Moore calls a "ridiculous individual," according to Huxley's transcript) on his work. "Not a huge fan of Stan Lee," Moore quipped after telling a couple of stories of Lee taking credit where Moore believed it wasn't due. "Huge fan of a lot of the people he's worked with." Ultimately, in about four minutes he expressed his disdain for Lee in a way that more or less lines up with his apparent attitudes about most top brass at Marvel and DC Comics over the years. He also discussed his forthcoming project, a follow-up to Neonomicon titled Providence, in which he explores the life of H.P. Lovecraft and the roots of the mythology for which he became known. He told the audience that Lovecraft, a bigot and a potential Nazi sympathizer, would be an interesting character to pair up with a second character who is secretly both gay and Jewish (we reported earlier that there were two other characters--one gay, and one Jewish--but it appears from this new report that there is only one character who is both). Check out Huxley's videos below. Huxley has also embedded full audio of the panel (but not the Q&A) here.