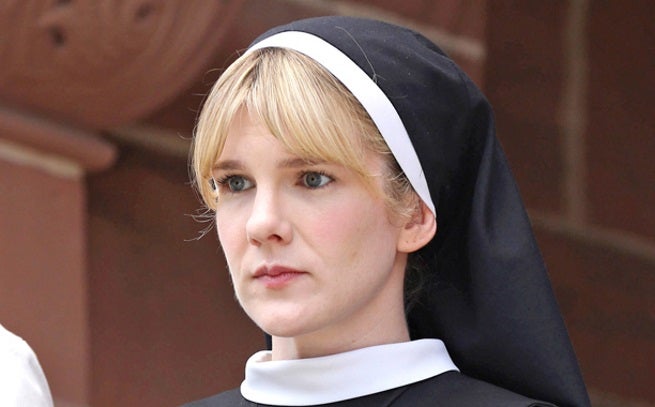 The Halloween episode of American Horror Story: Freak Show had a few surprises for fans. One these surprises was the appearance of Lily Rabe as Sister Mary Eunice, as character from the show’s second season, Asylum.

Fans have long theorized that the shows seemingly separate seasons were actually connected, and Sister Mary Eunice’s appearance is the most solid evidence supporting that theory so far. Show creator Ryan Murphy tells Entertainment Weekly that they’ve been right about the show’s interconnectedness all along.

“I don’t want to say much about it but obviously she’s playing Sister Mary Eunice,” Murphy says of Rabe. “The interesting thing about doing a show like this is every season is incredibly its own story and its own beginning, middle and end. Its own journey. But we have always from the very beginning in the intertwining mythologies and how things connect. This is the first year where we begin to tell you that season two is connected to season four which is connected to season one. People have started to write articles about that. A lot of their hypotheses have been completely right on. That’s the fun of the show. Hopefully by the end of the run, be it 10 years or 15 years, people will be able to stand back and be able to say, ‘Oh that was connected to x.’

“There’s definitely a rhyme or a reason and a connectedness to all of these seasons, but in the same way, they’re standalones, which is the fun of it. But it is a puzzle. And Lily coming back and dealing with Pepper is sort of the first unveiling of that connectedness. She’s so great in that role, Lily. I understood she wanted to go off and do her own show. But I was thrilled she was able to come back and give us a couple days and show how Sister Mary Eunice and Pepper are connected and how it’s all connected. I’m glad she’s back in the habit!”

Murphy went on to directly confirm that the seasons are connected.

“They’re all connected. We’re just beginning to tell you how they’re connected. They’re all very separate but there’s clues every season that we’re now telling you how the different worlds are intertwined.”

All The American Horror Story Seasons Are Connected