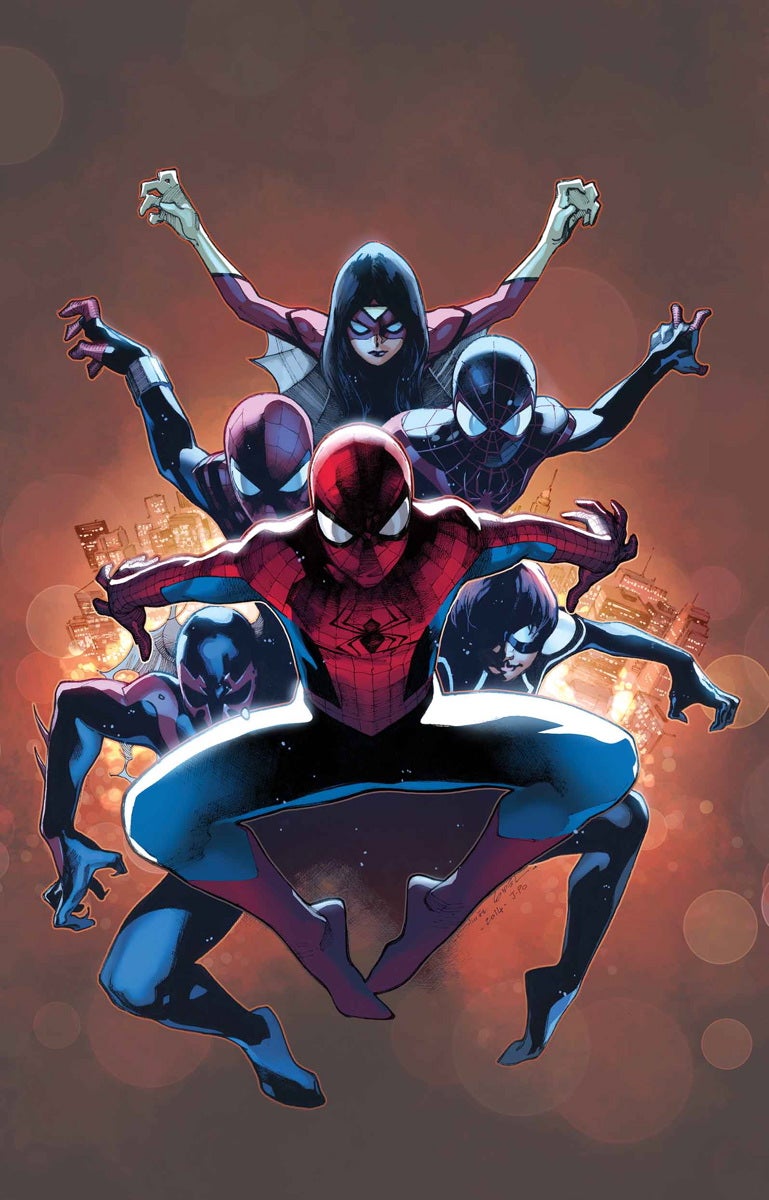 Dan Slott has distinguished him as the Spider-Man scribe of the 21st Century. Between his extended run on both Amazing Spider-Man and Superior Spider-Man and the many additions he has contributed to the mythos, no creator has had a greater impact on Peter Parker than Slott. His best work on the series has always come in the form of events. Stories like "Spider-Island" and "Ends of the Earth" have stood out as some of the best event comics at any publisher of superhero comics in the past ten years. They are contained to a central story with relatively few tie-ins, are based in previous events and characterizations, and move at a quick pace. So the hype for Slott's newest event "Spider-Verse" is well deserved based on his track record.

Unlike previous events, "Spider-Verse" has had a lot of build up with a complete "Edge of Spider-Verse" collection of tie-ins and mini-series. The result has been that this initial issue is less impactful than it might have been. Spiders die and the Inheritors are frightening, but these are all things that have been shown off for the past couple of months. There's nothing new about the events of Amazing Spider-Man #9 besides Peter finally being clued into what readers have been aware of for a long time. Slott is left to present old events rather than reveal a new twist or build momentum.

That isn't to say that there isn't still something disheartening about watching a new version of Spider-Man die or that the Inheritors aren't great villains. The central premise of this series still works fine. The issue is that the premise is already old news. Slott's series is going to rely on how this conflict plays out and that's what comes next. This leaves Amazing Spider-Man #9 in an odd limbo where it has to introduce a story that has already been introduced. It is an awkward reintroduction at a high school reunion between two people who actually remember each other's names.

Seeing so many Spider-Men and Spider-Women together is still incredibly appealing. Olivier Coipel provides a lot of different takes on the costume and basic motifs of Spider-Man so that each design is easily distinguished. Many of these variants have been introduced, but others leap into the action with little need for an introduction. Coipel works to present the various iterations in iconic poses. His compositions appear to be peacocking, showing off each Spider in their best, most dynamic form. That work helps provide some excitement for what is yet to come.

Giuseppe Camuncoli provides a similar sense of propulsion to the backup story. Although it focuses on the Inheritors in conversation around a massive dinner table (a less compelling visual premise would be hard to summon), Camuncoli finds opportunities to make the story engaging. His monstrous, broken versions of Spiders on dinner plates are fascinating, as is his work in presenting the Inheritors as the even more monstrous characters at this table. He provides plenty of shadows for these well dressed vampires to lurk in. The backup (and entire issue) is highlighted by Camuncoli's bright, big web of the multi-verse that puts dozens of different Spiders on display though.

Amazing Spider-Man #9 is a slow start to a still promising event. Slott has shown before that he has a great grasp of how to make overstuffed superhero stories function, and Coipel and Camuncoli are more than ready to put their best work on display. Assuming the series only gains momentum from here, there is a lot to look forward to in "Spider-Verse".