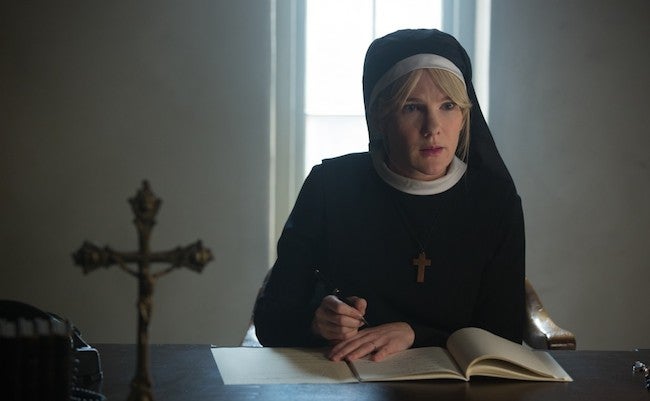 Episode ten of American Horror Story: Freak Show, “Orphans,” opens with the death of Pepper’s brother, Salty, who died while asleep. Elsa (Jessica Lange) talks about the death with Stanley (Denis O’Hare), also known as Arthur, who has a letter from “the head of the (TV) network.” He convinces Elsa to rest up for her show, leaving Salty’s body to him to deal with – immediately followed by a scene of Stanley crudely chopping off Salty’s head and putting it on display at the American Morbidity Museum, right next to Ma Petite.

Next, Dell (Michael Chiklis) visits Desiree (Angela Bassett), who is reading a book to Pepper (Naomi Grossman). The two speak alone, and Dell begs for forgiveness. He wants to get back together, but Desiree knows that she could never make him truly happy. The two appear to have made amends. Desiree meets with Elsa to prepare for the show and they have a drink.

In a flashback, Elsa details how she worked as a chorus girl in Boston before the war. Knowing that war was imminent and that the able-bodied carnies would be taken away to fight and work, she schemed to created her own circus of freaks. The first freak she found was Pepper, at an orphanage, after all of her family had died except for her sister, who found Pepper too much to handle. She was already 18 and was permitted to leave with Elsa, who says that she loved her unconditionally.

As Elsa’s collection of freaks grew, Pepper’s maternal instincts were answered by the arrival of Ma Petite (Jyoti Amge), who was purchased by Elsa from a travelling Maharaja who sold his “pet” for three cases of Dr. Pepper. Elsa answered Pepper’s desire for a mate as well, finding her Salty and officiating their marriage. Desiree, upon hearing the story, mourns for Pepper, who now has no one. Elsa and Desiree agree that perhaps it is time to seek out Pepper’s sister.

Next, Desiree and her boyfriend Angus (Malcolm-Jamal Warner) meet with Maggie (Emma Roberts) – known to them as Esmeralda – to read their fortune. Maggie starts to spin a tale of a happy future for the couple, before stating that everything will eventually end badly, perhaps even with Desiree cooking up tar as she did in a previous episode. Later, Desiree confronts Maggie, and Maggie – who’s had a few drinks – reveals to Desiree that she and Stanley are a criminal duo.

Maggie tries to convince Desiree that she and Stanley are simply in the business of picking pockets, but Desiree points out that multiple freaks have died since the duo showed up. Desiree threatens to kill Maggie if she finds out that they were responsible for any of the deaths.

The faux-fortuneteller heads back to her tent to find Bette and Dot, who want to give her money to hire a lawyer for Jimmy. Maggie denies their offer and picks a fight with the twins, who angrily thrust the money into Maggie’s arms as they leave. 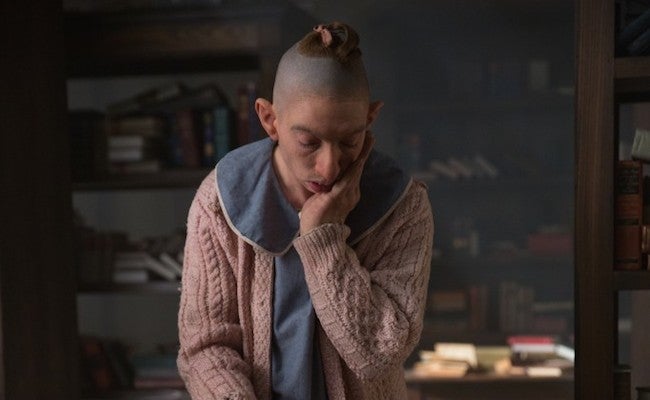 Jimmy (Evan Peters) is shown behind bars when Stanley visits him, and Jimmy explains that he blacked out for a long period of time when he was drinking away his grief for his mother. In fact, he thinks it might even be possibly that he did kill people. Stanley wants to hire a lawyer for Jimmy, but Jimmy has no money. Stanley cryptically suggests a way for Jimmy to get the cash.

Desiree is learning to cook back at the camp, now that she intends to raise a family with Angus. Maggie at first mocks her, but then pulls her aside to talk about Jimmy. She says that everyone in the camp will die soon if Desiree doesn’t help her, scheming to frame Stanley for everything.

Later, Elsa and Pepper are shown meeting with her sister in Massachusetts. She reveals that she thought she could never live a standard, marital life while taking care of Pepper, but she was unable to fulfill that dream anyway because of a fertility issue. She tells Elsa that her husband doesn’t even know Pepper exists, so she’s not sure how she could possibly take Pepper in. Elsa grows to anger when its evident that Pepper’s sister doesn’t appreciate her, let alone love her.

Pepper’s sister agrees to let her live with them, Elsa and Pepper share a tearful goodbye, and Elsa leaves.

Maggie takes Desiree to the American Morbidity Museum, prepared to tell her everything about Stanley. Desiree steps in to finds Ma Petite’s body, Salty’s head – and to Maggie’s shock – Jimmy’s hands.

Pepper’s sister is shown at the Asylum from American Horror Story: Asylum, meeting with Sister Mary Eunice (Lily Rabe), sending away Pepper. She tells Sister Mary Eunice that she was able to have a baby, named Lucas, that she frequently put in Pepper’s care, causing Pepper to occasionally mix up Lucas’s bottle with the cocktails she was asked to prepare. Then, the story continues that Pepper was “obsessed” with her brother-in-law, walking around the house naked.

In a flashback, it’s revealed that neither Pepper’s sister nor her husband could stand their crying baby or Pepper, when he shares his plan to kill two birds with one stone. Pepper’s sister tells Sister Mary Eunice that Pepper killed baby Lucas while giving him a bath, but another flashback shows the brother-in-law drowning the baby after locking Pepper outside.

Sister Mary Eunice meets with Pepper later in her cell, and when she sees that Pepper feels remorse, she frees her from her confines and sets her to task organizing the library, calling Pepper “her special project.” In the library, Pepper sees Elsa on the coverage of a Life magazine.