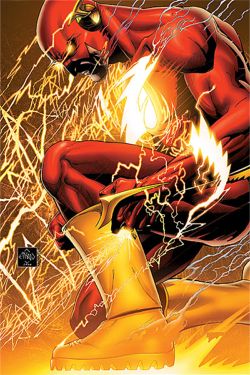 April Fool's jokes usually consist of innocent, harmless phone calls, fake spiders and the like. Practical jokes take it a little further with maybe alibis, pretend emergencies or other staged incidents. Most people can laugh these off quickly, acknowledge that they were had, and get over their initial "are you kidding me!" exclamations.

So why doesn't that always work with comic book events?

How many of us have found ourselves turning a page in one of our favorite books, checking the frames for some detail we missed, only to stop and express, loudly "Are you JOKING?!?!" after seeing that the shocking event we just witnessed did, in fact, happen. We feel like we've been had, hoodwinked, the plastic snake now a real cobra that's just eaten our cat! In keeping with the spirit of the day, a look back at 10 moments from recent years that we all thought, at the time, surely were jokes.

10. The Multiverse is Back, Again! DC had once used Crisis on Infinite Earths to tie up all the hopelessly complicated overlapping characters, conflicting origins and general confusion that seemed to populate its many worlds. Unlike other 1980's concepts such as New Coke and the DeLorean, the Multiverse didn't stay dead. It made a stunning comeback with Infinite Crisis, and DC once again had multiple characters to deal with, multiple Earths, and multiple fans left scratching their heads at this case of d j vu.

9. Kitty Pryde is Lost in Space! Talk about dodging a bullet! That's exactly what the entire Earth did in Giant-Size Astonishing X-Men, thanks to the efforts of Kitty. After the X-Men split up to deal with their entrapment at the hands of the devious Cassandra Nova, Kitty ends up phasing through a large, metal object, only to discover that it was a bullet aimed at the earth. With her body apparently fused to the odd material, she is able to muster enough energy to mentally phase the bullet through the Earth. The bullet is still, presumably, traveling through space, Kitty with it. Many people speculated as to whether or not Marvel would do this, and so they did!

8. Lex Luthor, President of the United States - There have been shady politicians in American history, and then there's Lex Luthor. Stunning the DCU with a rise to the presidency, Luthor was a huge shock for readers of any title. Even though Luthor was in the White House, his criminal activities never ceased. When he wasn't covering up his role in the lack of reconstruction of Gotham City after their earthquake, he was hiding an upcoming alien invasion. He was finally taken down by several members of the JLA, but needless to say, many thought that this moment in DC history was certainly head scratching.

7. Gepetto is the Adversary - I apologize up front for this reveal to any new Fables readers, but this has certainly been one of the biggest "what!" moments in comics in the past few years. Who would have suspected, after 40 issues of buildup, that slight, unassuming Gepetto, the kindly woodcarver who made Pinocchio, would turn out to be the mastermind behind the driving out of the other Fables from the Homelands. Even though several dozen issues have passed since that one, readers still found themselves looking past Gepetto for the real mastermind, but it really was him!

6. Villains are the New Heroes in Marvel's Civil War - With all the craziness and twists and turns that Marvel's Civil War threw at readers, perhaps one of the most shocking to come out of that was who was now on the side of the law. With Peter Parker switching to Captain America's rogue agents, the government, in a surprising full-page reveal, showed us a roster of federal agents made up with the likes of Bullseye, Lady Deathstrike and Jester. A fluke? Not so. Months later, we still see that the inmates are running the asylum, only on a much grander scale.

5. Elektra is a WHAT? One simple stab wound and the whole world goes nuts. Echo, now disguised as the warrior Ronin, stabs Hand leader Elektra, revealing a withered green corpse. The New Avengers are speechless, as is every reader. What did this mean? Aren't Skrulls supposed to be detectable? Not any more apparently, and readers kept waiting for the punch line in following issues, but no joke, no twist that made it make sense like things used to. This was the new reality. The Skrulls had invaded us, and no one, no one, was above suspicion.

4. Batman has a Son - Batman seemed like the kind of man who "loved 'em and left 'em." Romancing women but never allowing himself to get too far entangled, perhaps due to death, issues of secret identity, or, in the case of Talia al Ghul, a father who is one of Batman's mortal enemies. Talia drops a bomb on Batman, courtesy of Grant Morrison; he has a son! Although the identity and genetics of Damian are never fully revealed, the revelation has nonetheless shaken up the Bat universe. Will the truth ever be spoken?

3. Spider-Man: Married Today, Single Tomorrow - After unmasking himself in Civil War, readers wondered how much further Spider-Man could go now that he was public. It was a bold move, but the next step was even more dramatic. With Aunt May clinging to life after an attempt on Peter's life, Peter strikes a deal with Mephisto, who says he will save Aunt May if Peter and Mary Jane agree to give up the existence of their marriage. They agree, and fans everywhere are left reeling after a storyline that took them on one of the hardest emotional roller coasters ever.

2. Barry Allen Lives - After sacrificing himself to stave off the Anti-Monitor's plans for the destruction of Earth in Crisis on Infinite Earths, it seemed that one of the greatest heroes to emerge out of the Silver Age was gone forever. DC had kept him physically dead for over 20 years, but all of that changed with Final Crisis. In a shocking turn of events that left readers flipping back pages to check to see if what they had just seen was true, Barry Allen reappeared as the Flash, barely ahead of the Black Racer. With this dramatic return, the DCU now has a new level of surprise on their hands.

1. M-Day - Wanda Maximoff, the Scarlet Witch, stunned many when she uttered one of the most famous three-word phrases in comic book history: "No more mutants." Experiencing a psychological break that led to the destruction of the Avengers, Wanda retreated into seclusion, cared for by her brother and father. In an emotional confrontation between the heroes of Marvel and the newly formed "House of M", Wanda again gets fed up, this time with her father, Magneto's, vision of what the world should be for mutants. In uttering that phrase, she eliminated 90% of the powered mutants on Earth, and left jaws hanging as the world we knew changed in a blast of white light.

April Fool's? 10 "Are You JOKING" Moments in Comic Books