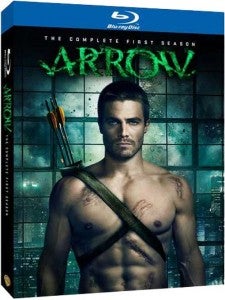 The first season of the hit CW drama Arrow, based on the DC Comics character Green Arrow, is coming to Blu-ray and DVD on September 3, according to Green Arrow TV. The series will retail for $69.95 on Blu-ray, which includes an Ultraviolet digital copy as well. Obviously, as with most box sets, it will be rare to actually pay the retail price, since online retailers, discount stores like Target and Wal-Mart and electronics stores like Best Buy routinely discount them steeply. Even the Warner Bros. store is only asking $50 to pre-order the season. No other information was available today with regard to what, if any, special features will be included on the DVD but if the last few seasons of Smallville--The CW's last DC property--is anything to go by, it will likely have a documentary, some deleted scenes and one or two commentary tracks.