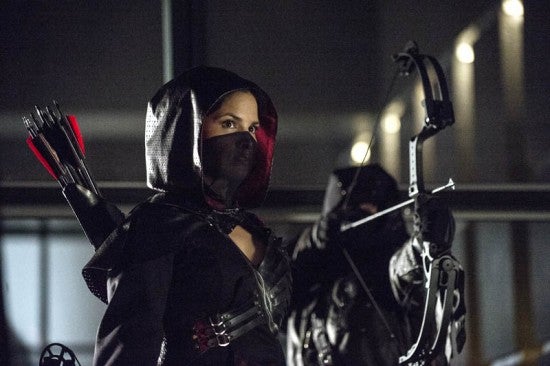 Nyssa Raatko, the daughter of Ra's al Ghul and former lover of Sara Lance, will return in the season finale of Arrow, The CW have confirmed. Katrina Law, who played the character in "Heir to the Demon," will reprise the role, as seen above in one of (if not the) first official image from the finale. As many fans have sussed out, when Sara Lance drove off-screen in last week's episode, it wasn't because she was giving up on Team Arrow or Starling City. Rather, said showrunner Andrew Kreisberg, it's because she understood the team needed help. "She went to go get help, because when you're fighting an army, you need an army," Kreisberg told reporters at a recent screening. "She goes and gets Nyssa, and she comes back with The League. It's The Arrow, Canary and Roy and the League of Assassins versus Slade and his Mirakuru Army." Nyssa will join at least Amanda Waller (Cynthia Addai-Robinson) and Malcolm Merlyn (John Barrowman) in her return to Starling City, making for a pretty crowded finale battle between Deathstroke and his Mirakuru army, Team Arrow and, apparently, at least the League of Assassins if not the Suicide Squad. The episode airs on May 14 at 8 p.m. ET/PT on The CW. You can check out the official description below. "Unthinkable" — (8:00-9:00 p.m. ET) (Content Rating TBD) (HDTV) OLIVER MUST DECIDE ONCE AND FOR ALL IF HE'S A KILLER OR A HERO — Slade (Manu Bennett) moves forward with his plan to kill one more person in Oliver's (Stephen Amell) life. While Oliver has fought all year to be more than the killer he once was, when Slade kidnaps someone close to Oliver's heart, Oliver is pushed to the edge and realizes sometimes it takes doing the unthinkable to stop the monster. Meanwhile, Diggle (David Ramsey) takes on Amanda Waller (guest star Cynthia Addai-Robinson) with a little help from some friends, and Thea (Willa Holland) turns to Roy (Colton Haynes) in her time of need. John Behring directed the episode with story by Greg Berlanti and teleplay by Marc Guggenheim & Andrew Kreisberg (#223).