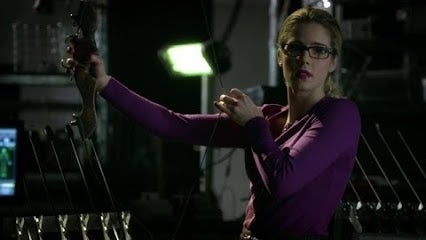 A week ahead of going into production, the title of the Felicity Smoak-centric Arrow episode that was planned to be called "Oracle" has been retitled "The Secret Origin of Felicity Smoak," Entertainment Weekly reports.

Charlotte Ross will appear in the episode as Felicity Smoak's mother, but the mystery of her father's identity will reportedly continue past the episode.

Many fans have speculated that one or both of her parents may turn out to be recognizable DC Comics characters -- possibly a villain, for instance. Producers have been cagey about the character's roots but have teased that what they've got planned for her will shift the way she's perceived.

"We've established in the past that mom is a cocktail waitress in Vegas," Executive Producer Marc Guggenheim said. "She and Felicity are two very different people. Episode 5, which is when Felicity's mom comes to town, really deals with the differences between these two women and how much of their relationship is a struggle as a result. It's a real challenge for these two people to find some common ground."

The "Oracle" title had thrown fans for a bit of a loop, since there are certainly some similarities between Arrow's Felicity and Oracle, the longtime Batman supporting character who provided intelligence to the superhero community.

Oracle is actually Barbara Gordon, the daughter of Gotham City Police Commissioner Jim Gordon. At the time, she had lost the use of her legs and could no longer be Batgirl, so took on the Oracle identity to work with the Suicide Squad and Birds of Prey -- two teams that have already appeared on Arrow. At least the Suicide Squad is expected to appear some more this year.

There's some speculation that since Jim Gordon is the main character on Fox's Gotham, that series may have played a role in dialing back use of the name "Oracle."

Last year, when the Birds of Prey were featured in an episode, Guggenheim told reporters that they hoped to bring Felicity to the point where she could take on an Oracle-like role for the team.

"She plays a role, but not in the way you're hoping," Guggenheim said at the time. "Hopefully we'll get there--that occurred to us as well but we didn't have an opportunity to do that in [Episode] 17."

DC Comics commonly relates origin stories as "The Secret Origin of..." a character, even if the origin is well-known and not secret.

Arrow Producers Going in a Different Direction With Felicity's Backstory