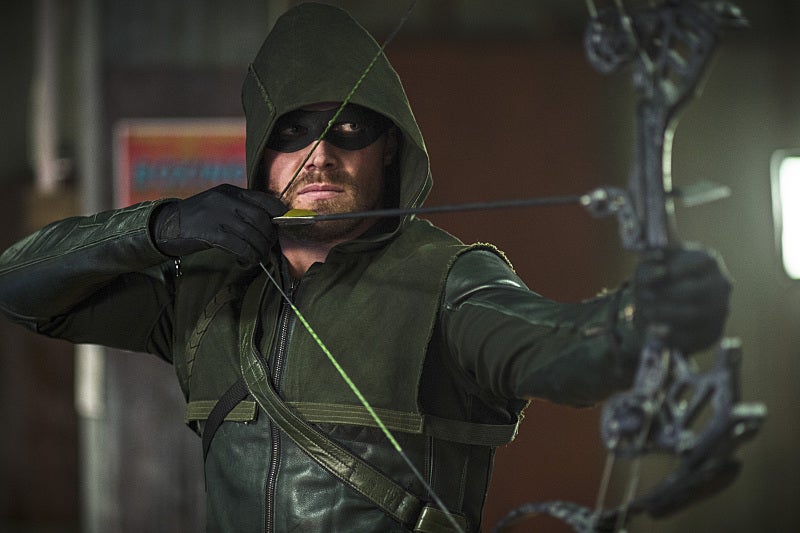 “Guilty” opens with Arsenal reliving the vision of him killing Sara. He needs to snap out of it though, as he, Arrow, and Diggle are about to bust a drug deal.

Arrow walks inside the abandoned warehouse where the deal’s taking place, but it looks like someone else beat them to the punch. Arrow finds the gang members strung upside down, dead. in the next room, Arsenal finds the word “Guilty” written in blood on the warehouse floor. There only lead in the murders is a gang member named Paco. Back at the base, Arrow and Diggle try to find Paco’s whereabouts. Arsenal wants to help, but Arrow tells him that he needs to rest and sharpen up.

Back in the past, Oliver and Maseo pursue target. The target tries escaping, but he is hit by a car and dies before providing the intel that Oliver and Maseo need. Oliver tells Maseo that he couldn’t get an information out of while in pursuit, but Maseo corrects him. He says that Oliver has the info, but just doesn’t know it yet. Later at Katana’s home, Oliver plays a memory-matching game with her son. Museo needs Oliver to remember what he say when pursuing their target. Once he does, then Maseo’s mission will be complete and they will be free of Amanda Waller and Oliver. Katana helps Oliver jog his memory. She trains Oliver to strip the distractions in his mind and focus on what he saw. With a clear head, Oliver finds what he is looking for. It’s a name for another target. With the necessary information, Katana orders Oliver to leave her home.

In the present, Ted Grant and Laurel spar in Grant’s gym. After the workout, the two go out to grab a bite to eat. Back at the Arrow base, Roy asks Smoak to test his blood again for Mirakuru. As Roy rests, Arrow finds Paco’s accomplice and possible lead on the Guilty case: Emilio Ortega. Tracing Ortega’s phone signal Arrow rushes to Ortega’s last location: Grant’s gym. when he Arrow arrive, a man is strung upside down like the drug dealers in the warehouse, with “Guilty” once again written in blood. Then, Grant and Laurel enter the room. Arrow points an arrow at Grant and accuses him for being the killer, but Laurel provides the alibi that they were out eating. Captain Lance asks Laurel why she’s ben seeing Grant, but she says that he’s only his trainer. When she leaves Ted’s gym, she pleads Ted’s innocence to Oliver. Oliver doesn’t trust Ted, despite the alibi, and warns Laurel to watch her back around Ted.

Smoke confirms that the Mirakuru is indeed out of Roy’s blood, but Roy is still unsettled. He admits that he’s been having the intense dreams of murdering Sara, claiming that they feel more like dreams. Felicity feels uneasy about this information. Oliver and Diggle enter the Arrow base, where they discuss Ted’s history as a prize fighter known as “Wildcat”, and history of beating a man to death with brass knuckles.

Then, Smoaks’ s tracker on Grant goes off. Arrow follow his movement to a hideout, where he finds another body strung upside down with the bloody “Guilty.” There are brass knuckles sitting on the nearby table. Then Ted enters the incriminating scene, and the two skirmish—complete with a boxing glove arrow shout-out. Arrow asks how Ted could be innocent after he’s found at two identical crime scenes, but Ted reiterates that he didn’t kill the men. Why? Because, Grant claims, he used to be a vigilante like Arrow. He says that he only fought crime in the Glades six years ago, which is why nobody had ever heard of him. Grant claims that he’s being set up by a former enemy. Grant says that he and Arrow need to partner up to stop the old enemy. Grant says that the stranger is leaving Grant a trail to follow, supposedly to a trap. Laurel brings files on the lead suspect, a man named Mancini, to Arrow and Grant. The two head to his last known location.

Back as base, Smoak talks to Roy about Sara’s murder. After conducting another autopsy on Sara, she surmises that it would have been possible for someone to kill Sara by throwing arrows into Sara’s chest: Someone like Roy.

At the hideout, Arrow and Grant confront Ted’s old adversary, who’s wearing Ted’s old vigilante gear. Arrow tries pursuing the masked villain, but the Starling City Police Department busts the scene. The man flees, and the police arrest Grant for a body found in his his storage locker. The mission a wash, Arrow, Diggle, and Laurel return to Verdant. There, Roy admits to the three that he killed Sara. He explains the repressed dreams, and Smoak explains that residual Mirakuru made him to do it. Oliver lets Roy leave, but the rest of the teams doesn’t know what to make of the news. Smoak’s DNA tests and forensic evidence are still too inconclusive. Arrow tells Laurel to focus on the case at hand. If Roy did kill Sara, they will deal with it when they know for sure. In private, Diggle tells Arrow that they may have to cut Roy loose.

At Starling City Police Department, Laurel stops her father’s interrogation of Ted. But, Laurel tells Ted that if she is to help him, he needs to tell her everything he knows. Ted reveals that the masked man’s identity is Isaac Stanzler. Stanzler was Ted’s old assistant, or he Diggle to Olvier’s Arrow. He reveals that their relationship soured six years ago, when Stanzler, not Grant, killed the drug dealer with brass knuckles. Disgusted with Stanzler’s behavior, Grant told him to flee Starling City and never return. He retired crime fighting afterward. It’s enough to let Grant walk. As he and Laurel exit the police department, Stanzler get the drop on them. He takes the two of them hostage, swearing revenge on Ted for abandoning him. Laurel is able to dial Smoak in secret as she is forced to drive them to an unknown location. With a signal on the three, Arrow and Arsenal track Laurel car on their motorcycles. After a brief on-road skirmish, Laurel crashes the car. Stanzler pulls himself out of the car and fights Arsenal while Arrow pulls Laurel to saftey. In their fight, Stanzler whispers poison to Roy. Stanzler says that Arrow will abandon Arsenal, just like Ted abandoned him. Arsenal says that he’s nothing like Stanzler, and subdues him. With Stanzler down, Arrow promises Arsenal that he will never abandon him.

Later, Arrow visits Ted at his gym. He tells Grant to stay away from Laurel, but Grant says that decision is up to her. Ted also warns Arrow to never lose Arsenal. Arrow counters that Grant never “lost” Stanzler, but only lost faith in him. Arrow then goes back to the Verdant base, where he tells Roy to retire that he needs to retire his Arsenal persona. Roy says he is turning himself to the police. But before he lets Roy do so, Oliver employs the same memory-clearing technique that Katana used on him, hoping to uncover hidden truths in Roy’s mind.

Roy clears his head, and sees himself killing a police officer the first night he was on Mirakuru (back in Season Two). He knew that he had stabbed the officer with an arrow, but never knew that he killed him. Arrow says that he withheld the information from Roy, not wanting to upset him in his fragile state. Given the similar manner that Roy killed the cop and Sara was murdered, with arrows, it explains why he had such confusing dreams. He is officially innocent.

At Ted’s gym, Laurel visits “Wildcat.” She asks him to further her training, and even wants to be his new partner. Ted accepts. Across town, Stanzler is escorted between prisons. But once he and his two escorting officers are out in the open, they are shot down with arrows. They belong to a female archer who calls herself “Cupid.”