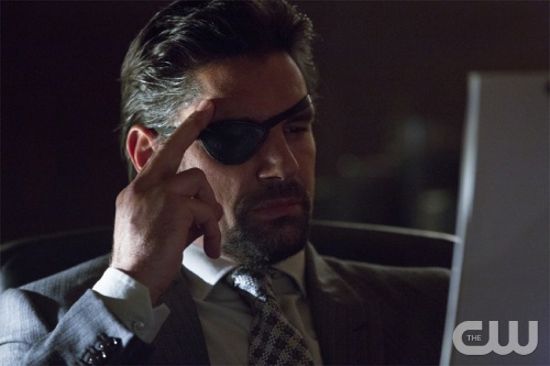 The CW has released a series of sneak preview clips for tonight's episode of Arrow, which is called "Blind Spot." The first sneak preview is a collection of scenes, which tease Laurel being in over her head. The producer's preview shows Executive Producer Andrew Kreisberg talking about the return of Sin. The clip features Roy utilizing his superhuman strength and losing control. In the "Blind Spot" episode of Arrow, Oliver (Stephen Amell) is conflicted after Laurel (Katie Cassidy) reaches out to the Arrow asking him to investigate Sebastian Blood (guest star Kevin Alejandro).  Oliver is unsure whether to believe her accusations against the man he has publically supported for mayor, but decides to trust Laurel.  However, when the pair gets too close to the truth, Sebastian exposes Laurel's drug addiction and has her arrested.  Meanwhile, Roy (Colton Haynes) reveals his new super-strength to Sin (guest star Bex Taylor-Klaus) who wants to test out his abilities.  Unfortunately, Roy isn't able to contain his rage once unleashed and almost kills a man.  Back on the island, Oliver is surprised when Sarah (guest star Caity Lotz) reveals a secret about Laurel. The "Blind Spot" episode of Arrow is directed by Glen Winter and written by Wendy Mericle & Beth Schwartz. "Blind Spot" is scheduled to air on Wednesday, January 22, 2015 at 8 PM ET on The CW.