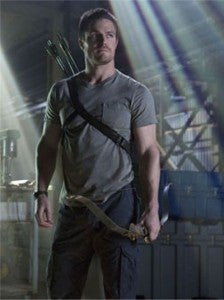 The CW's Smallville ran for ten seasons, which made it the longest running superhero television series of all time. Tonight, The CW is launching another superhero television series, which they hope will enjoy the same success as Smallville. Arrow is based on the popular DC Comics superhero Green Arrow. However, unlike Clark Kent, Oliver Queen who becomes Arrow doesn't have any super powers. He's more like Bruce Wayne, who just trains really hard to become a superhero. The pilot episode of Arrow is called "Justice." According to a description from The CW, the "Justice" episode will focus on the origin of Arrow. After a shipwreck, billionaire playboy Oliver Queen, who is played by Stephen Amell, was missing and presumed dead for five years. After being discovered alive on a remote island in the Pacific, Oliver returns to Starling City to reconnect with those closest to him. However, it turns out that Oliver has brought back some new skills from his time on the island, which helps him to create his new persona of Arrow. As Arrow, Oliver works as vigilante to right the wrongs of his family and fight evil. David Nutter directed the "Justice" episode with story by Greg Berlanti and Marc Guggenheim and teleplay by Andrew Kreisberg and Marc Guggenheim. Arrow premieres on Wednesday, October 10 at 8 PM ET on The CW. Check out an extended three and a half minute sneak preview of the "Justice" pilot episode below.