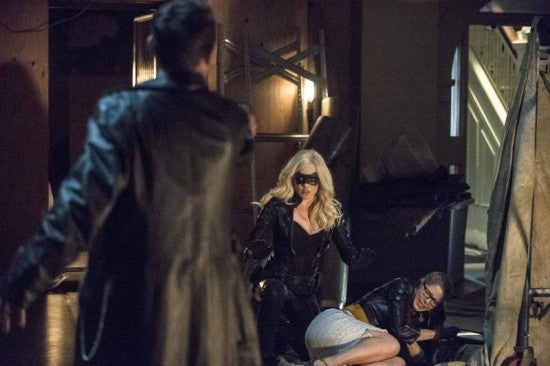 When Oliver Queen and Sara Lance stripped each other's clothes off and started making out at the end of the most recent episode of Arrow, the "Olicity" fandom largely groaned in frustration at the turn of events. Meanwhile, there's been a lot of conversation about what this means for the character going forward: Oliver now has a relationship--and it's with Black Canary, to whom the character was once married in the comics. Does this mean the relationship is for real? How does that change our perception of Laurel, who fans expected to be his long-term love interest in the show's first season? Series star Stephen Amell sat down with TVLine yesterday and answered some questions about his character's personal life. 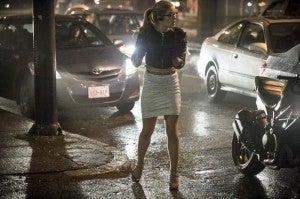 "Caity [Lotz] and I talked a lot about [what caused Oliver and Sara to suddenly come back together]," Amell said. "There is a lot more history between those two characters than the audience knows about because there are a lot of things that are happening on the island that we haven't seen unfold yet. We don't know yet, as a viewer, how important Sara is in Oliver's life. This was backed up for us by the writers, that there is a far richer history, whether it be romantic or not, between Oliver and Sara than we have experienced yet on screen. So, I understand why it rubbed some people the wrong way, that in some sense it came out of left field, but to think that this was just an 'I'm sad, you're sad, let's have sex' moment would be incorrect. The deepness of their connection, we don't totally understand yet, but it's certainly deeper than a casual hook-up." He added that while he did once tell Felicity that he couldn't have a relationship with anyone he cared about because of the danger of what he does, that doesn't really count for Sara, who can handle basically anything thrown at her as well as Ollie can. He also notes that while fans may hope for Oliver and Felicity to end up together, the writers are keen to make sure that she is established as a strong character in her own write, rather than just "Green Arrow's girlfriend." "When we introduced Barry [Allen] in Episode 8 and 9, we saw a lot of people saying, 'Oh, Oliver's jealous.'" the actor said of his character's bristly response to the soon-to-be Flash and his obvious crush on Felicity. "I don't know how it came across, but that certainly wasn't the way that I was playing it. It was more curiosity about this guy and their interaction. But jealousy? Not so much. We have this Oliver/Sara thing happening now, and the immediate reaction is, 'Oh, Felicity's going to be jealous.' But Felicity's way stronger than that. Felicity is much more interested in the overall goal of this team than the fact that Oliver and Sara might be together, and we see that in this next episode. We see Diggle say, 'This must be difficult,' and her say, 'Yeah, OK. Leave me alone. I'm working.' So, I think that we will see Oliver and Felicity's relationship really solidified as partners and equals. You can see the clip he's talking about here.