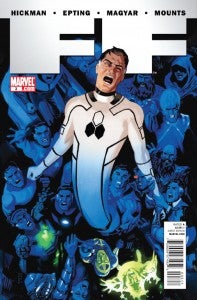 Even without a major announcement from Marvel, few who attended Marvel Comics "Team Spirit" panel at Fan Expo Canada will feel like what they sat through was anything typical. FF cover artist Marko Djurdjevic joined writer Jonathan Hickman and interior artist Steve Epting at that panel in Toronto and almost immediately began lobbing grenades at his editors and Marvel's other creators, according to reports by Comic Book Resources and Bleeding Cool. After announcing that he had put an early end to his exclusive deal with the publisher, Djurdjevic, who claims Marvel asked for repeated, unpaid revisions, compared working on a page rate at a major comics publisher unfavorably to the experiences he's had working in film and video games. "Either pay or leave," he said, claiming that editors were having him redraw some of his work with no clear idea what it was they wanted him to come up with. Djurdjevic, one of Marvel's more popular cover artists in recent years, claimed that Marvel wanted to pigeonhole him and saying that in those other industries, "I get hired for my creativity. At Marvel, I get hired for what they know sells." Hickman and Epting reportedly made a few attempts to get the panel back on the rails, but it didn't seem to help; CBR reports that after Epting asked Djurdjevic whether he wished he had done more interior art, Djurdjevic said that Marvel never teamed him with writers he liked, specifically calling out his Thor collaborator, superstar J. Michael Straczynski and saying that he "writes like toilet paper." While a two-week-old Facebook post reprinted by Bleeding Cool indicates that Djurdjevic's relationship with the publisher ended then, but he thanked the publisher in that post for everything he had learned there in the last few years, and said little to indicate the level of frustration he conveyed at the Fan Expo panel. Fans hoping to see more work from Djurdjevic might want to look to the film and video game arena, though; not only does it seem rival publisher DC (who famously fired top-tier writer Dwayne McDuffie after comments he made on internet message boards about interference on Justice League of America which were, frankly, far less offensive than anything Djurdjevic said about his employers) would take a chance on him at this stage, it also sounds, based on the aforementioned Facebook post, like he's planning to get out of comics, at least for the time being. "It's over. No more superheroes, no more sad men in tight clothes, no more covers, at least for a long while," wrote Djurdjevic according to Bleeding Cool. He also talked about "closing this chapter" of his career and focusing on SixMoreVodka, a studio whose website describes itself as the home to a number of up-and-coming German artists working in various industries. Will this outburst affect the ability of Djurdjevic or his clients to work with Marvel in the future? Apparently not, according to the Bleeding Cool report. An unnamed Marvel representative essentially said that it's a shame Djurdjevic feels that way, but that he's still "a good friend."

NieR: Automata is Getting its Own Anime Next Year