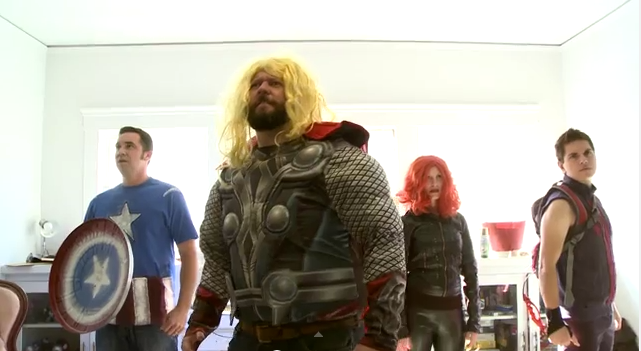 Avengers: Age Of Ultron will make Marvel Studios history as the brand's most visual effects-heavy film.

But…what if the Avengers sequel made history for having the exact opposite? Behold, a world that could never be in this Sweded version of Avengers: Age of Ultron’s theatrical trailer. “Sweding,” is when someone recreates a Spark-Notes version of a feature film using a shoestring budget and a handheld camcorder. The term stems from the film Be Kind Rewind, when the film’s main character accidentally erases all the video tapes at his VHS rental shop. To compensate, he recreates each film himself and tells customers that his home-made versions actually come from Sweden. Thus, Sweded” became the short-hand term. Since the film’s release in 2008, people have made their own Sweded versions of blockbuster films, ranging from the first Avengers film to The Dark Knight Rises.

In the trailer, Age of Ultron is reincarnated in glorious back-water fashion. Relying on duct-tape, cardboard, some action figures, and good-old fashioned imagination, the Sweders bring the Avengers into the Age of Analog. It’s probably not up to Joss Whedon or Kevin Fiege’s standards, but it should keep you plenty entertained until the next trailer lands.