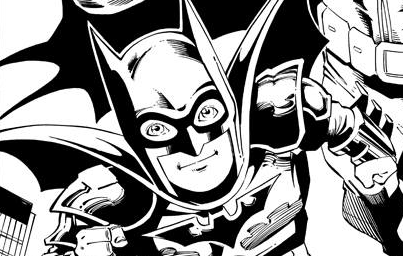 Five-year old Miles Scott, better known as "Batkid," is now in remission after battling cancer since he was a baby. In recent weeks, Batkid captured the attention of the nation when the city of San Francisco came together and transformed the city into Gotham City when the Make-A-Wish Foundation pulled some strings to get Batman superfan Miles the job of superhero for a day. He followed that up with an appearance on Good Morning America, where he thwarted The Joker and rescued recording artist Pitbull. 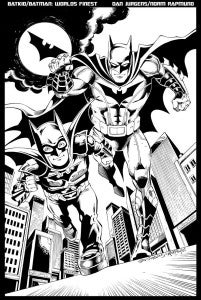 While he was on the set of Good Morning America, Miles was presented with a piece of original art depicting his adventure as Batkid, fighting alongside Batman in the streets of Gotham. The image, seen at left, was created on behalf of DC Entertainment by the longtime Booster Gold art team of Dan Jurgens and Norm Rapmund. "If any of you are familiar with Batkid (how can you not be?), Norm Rapmund and I recently did this on behalf of DC Entertainment so it could be presented to him on the November 24 edition of Good Morning America," Jurgens wrote as he shared the image to Facebook. Batman is one of a handful of DC characters that Jurgens has never drawn regularly, although he has made significant appearances in Booster Gold as well as the Jurgens-written and -drawn Zero Hour crossover, among others. Jurgens and Rapmund have also been known to create DC art for mainstream commercial consumption; they drew a number of covers for Justice League comics included in General Mills cereals in 2012.