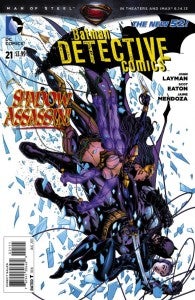 Will she be Robin, or won't she? It'll be months before we know, but for now, let's take a look at Harper Row tagging along with Batman on another mission in a preview from Detective Comics #21. Check out the official solicitation information and preview pages below.

When Batman intercepts an out-of-town hit squad targeting a visiting foreign dignitary, it seems like an open and shut case. But it turns out the Dark Knight's troubles are just beginning when a mysterious woman named Penumbra emerges from the shadows to confront him on his home turf. Who is pulling Penumbra's strings and what is her connection to Bruce Wayne's past? Then, there's been a grisly murder in Gotham and it bares all the hallmarks of a Man-Bat attack. Kirk Langstrom must determine if he can control the beast within or if it's the beast that's controlling him. Guest-starring fan-favorite character Harper Row, DETECTIVE COMICS #21 comes to you from writer John Layman and artists Scot Eaton, Jamie Mendoza and Andy Clarke. Look for the issue when it hits stands tomorrow.

Batman and Harper Row Team Up In Detective Comics #21 Preview