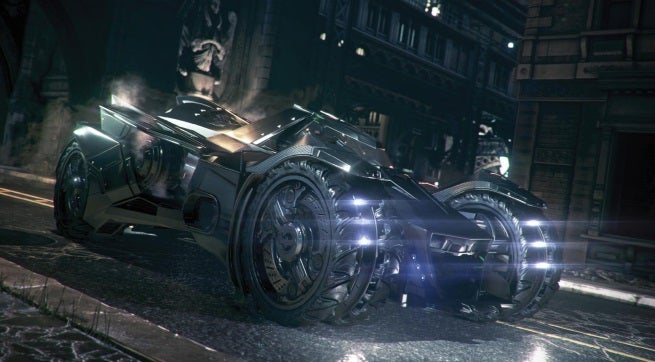 Earlier we got our first look at the Batmobile in action in Batman: Arkham Knight. Rocksteady and Warner Bros. Interactive Entertainment didn't stop their though. They also brought real life Batmobile, as designed by West Coast Customs, to the E3 show floor.

The Batmobile is a major new gameplay feature in Arkham Knight, the final installment of Rocksteady's Arkham trilogy, so it makes sense for the studio and their publisher to push it hard in their marketing. I admit that I'm still a little perplexed by why Batman's ride is tricked out with lots and lots of guns since he's usually not a fan.

Batman: Arkham Knight sees Batman going up against the Scarecrow, who has brought together all of Batman's greatest villains following the death of the Joker in Batman: Arkham City. On top of that, a new player called the Arkham Knight has entered the conflict with the goal of ending the Batman.