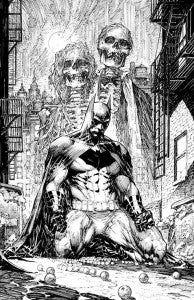 It's been rumored for a while, but now it's official: DC Comics will resurrect the Batman: Black and White franchise for a 6-issue run beginning in September.

The series originally began its life as a four-issue anthology before moving into several the Batman monthlies as backup features. It hasn't been printed for years, but collectibles and collected editions based on the idea have been fairly evergreen for DC.

Featuring some of the industry's biggest names, Batman: Black and White is just what it sounds like: Batman stories told in black-and-white, often with a kind of noir/mystery tone to them that suits the (non-)palette.