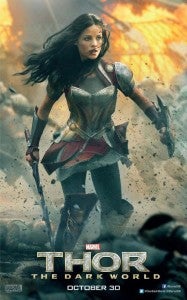 That is--she said she's been in talks with Warner Bros. and DC Entertainment about...well, something.

Oh, and according to Forbes comics blogger and Batman superfan Mark Hughes, "She also knows things about Batman vs. Superman."

Considering that Alexander is playing the badass Lady Sif in the Thor films, it seems likely that bringing her into the fold will revive those Wonder Woman rumors that never completely went away. When a recent Batman vs. Superman casting notice went out, lots of media types noted that it soudned a lot like they were looking for a Wonder Woman, but later reports suggested it was likely just a love interest for Bruce Wayne.

Jaimie Alexander has been having "comversations" w/ WB/DC. She also knows things a/b BATMAN VS SUPERMAN's story. Do the math... #Comikaze13

Batman vs. Superman is coming to theaters on July 17, 2015. Hopefully, a full transcript from, or video of, the Comikaze AMC panel will surface online to give her comments some context. There's quite a bit being said there, if you follow Hughes's Twitter account right now.