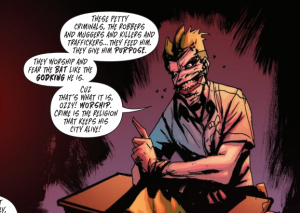 In today's issue of Batman, there's quite a bit of rumination on the Joker's motivations. What sticks out like a sore thumb, though, is some of the religious imagery used in the issue, along with material we got in the solicitations for February product and a look back at one of the great Gotham-based stories of the last decade. "Crime is the religion that keeps [Batman's] city alive!" The Joker says in the issue, as seen at right. Here's the thing--the "crime as a religion" thing is already pretty well-established in Gotham City. "The Crime Bible" popped up in 52 and continued to be a major part of Batwoman's story from that point forward. The book deals with the exploits of Cain and his works of evil in the world, in association with Lilith (who plays a role in both Archer & Armstrong and Rachel Rising right now). The copy of the Bible seen most often in the DCU allegedly has a cover of stone, made from the physical rock used to kill Abel. It might be a stretch, just to say that because Joker uses religion as his rationale, he's probably tied into the Crime Bible. What makes us think there might be something to it? According to the solicitation for Detective Comics #17, out in February just after the current storyline ends, "The repercussions of Death of the Family spread as Batman tracks down the League of Smiles, a criminal group of psychotic killers that worship The Joker!" Worship? There's the same religious overtones again. And it seems as though, maybe, Joker's endgame here might be to transition Gotham from a place where Batman is elevated as a thing to fear and worship to one where it's the Joker on that pedestal.

Batman's Death of the Family: Will Joker's Mission Tie Into the Crime Bible?