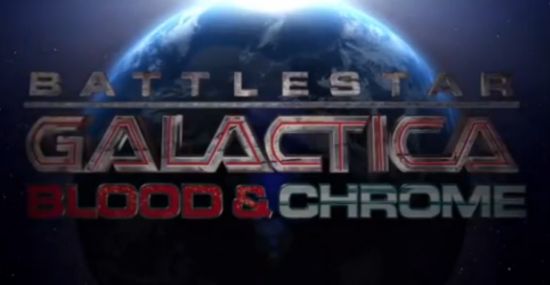 With all the talk about Star Wars, we wanted to post a little reminder about another popular science fiction series that is returning. Battlestar Galactica: Blood and Chrome is being released this Friday, November 9 online. According to EW, Battlestar Galactica: Blood and Chrome is a prequel movie, which will be split into ten episodes lasting about seven to twelve minutes each.  The episodes will air on Machinima's YouTube channel, called Machinima Prime. After the first episode is released on Friday, the remaining episodes will be released over the next four weeks. The prequel tells the story of young William Adama, who is played by Luke Pasqualino, during the first Cylon War. Adama is at odds with his co-pilot officer Coker, who is played by Ben Cotton.  The series will use "virtual set" CGI technology. In addition to YouTube, Battlestar Galactica: Blood and Chrome will also be presented as a two-hour version on Syfy in early 2013. There will also be an unrated version made available on home video.