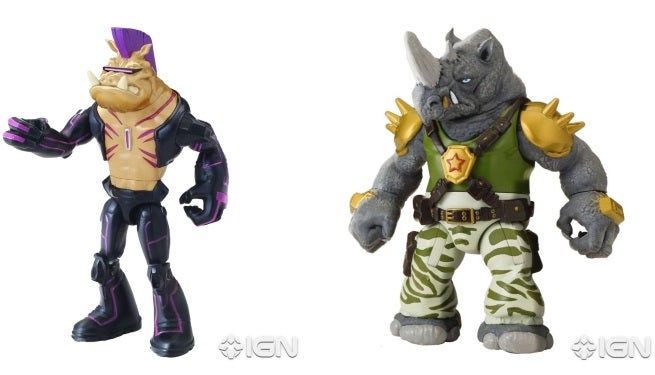 IGN has a first look at the Walmart exclusive Bebop and Rocksteady action figures, based on what the characters will look like when they debut on Nick’s currently running Teenage Mutant Ninja Turtles cartoon in January, during the series’ third season.

"Fans old and new alike have been waiting for these two great villains to make their big return, and the time has finally come," said Manuel Torres, Senior Vice President, Global Toys and Publishing, Nickelodeon. "Turtles is having such incredible success on TV, in toys and across movie theaters worldwide, and adding Bebop and Rocksteady to the mix will just ratchet up the energy even higher."

Bebop: "A half-human, half-warthog mutant, Bebop was once known as Anton Zeck, master thief. Zeck was mutated (along with Ivan Steranko) after getting on the wrong side of Shredder. With his bright purple mohawk and unlimited stealth tech, Bebop's villainous thieving opportunities appear endless."

Rocksteady: "A former Russian arms dealer, Ivan Steranko was a collector of rare weapons and armor until he angered Shredder. Doused with mutagen mixed with rhino DNA, Steranko soon became the incredibly strong and massive mutant known as Rocksteady."