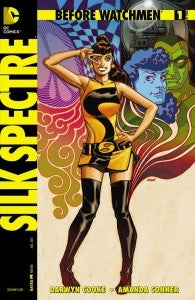 With Before Watchmen: Silk Spectre behind her, Amanda Conner's hectic schedule is...well, still pretty hectic. Conner writes and draws an awful lot of material every month, even when she doesn't have one or two DC projects on her plate. Still, there's something special about a project like Before Watchmen; it's a book that will be near the top of her bio forever and will help to elevate her already-impressive profile among casual fans. Conner joined ComicBook.com to look back on Silk Spectre and forward to what's next. Is it kind of odd looking back on a project of this magnitude as something that you've done, rather than something you're doing? I hadn't really thought about it too much. While I was doing it, I was doing it almost around the clock and I was so exhausted that when I stopped I just sort of crashed. I haven't really gotten a chance to recuperate from that. The last two issues that I had finished I was sort of working and working and working nonstop on it and getting four and five hours of sleep a night. So when I stopped, I thought I'd be in more of a partying mood but all I wanted to do was just sleep. I keep waking up and going, "I have to go to work!" and then saying, "Oh, no, wait--I don't have to work quite so hard." It's not as though you get all that much of a break - you keep a lot of plates spinning at any given time. I do tend to keep really busy. When I'm not drawing, I'm usually doing something else and sometimes it gets to where I need a little break and I'll say, "I'm not going to draw anything, I'm just going to do this other thing for a couple of weeks." I thought I would be doing a little less drawing but it appears that I have stuff lined up now that I'm done with Before Watchmen. the plan was to take a vacation maybe next week but we're not going to do that. And I like taking on small, weird things, also, every once in a while. I like to do the high profile stuff but once in a while some small thing that I like to get my hands into. 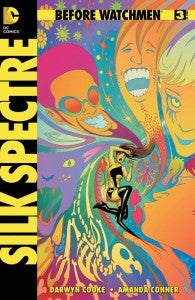 One of the nice things that happens with you is that you can jump onto some smaller, oddball project and raise its profile and market cred a bit. There is a lot of good stuff out there, that if the characters aren't well-known, it doesn't get a lot of acknowledgment because people don't tend to notice it. I really do have a love for oddball stuff, so if my being involved in something gives it a boost, that's great. I hope that's what happens! And that ties into Before Watchmen - everyone attached are people who tend to do really well in the bookstore markets. You didn't have Jim Lee or something for the comics market, but everyone involved was popular both inside and outside of the direct market stores. Yeah. I think the way they chose everybody for this project was that a lot of people just wanted to impress. I don't want to speak for anybody else, but that's how it was for me. In fact, Darwyn [Cooke] was the one who got me on this project. He was thinking that I would be able to be really good at bringing a 16-year-old girl's perspective to the project because I sort of remember what that felt like all those years ago (I'm not telling you exactly how many years). I can't speak for anybody else, but my goal was to really--I know there's going to be no way I'm going to be able to be as good as the original, that's a given, but if I at least attempt to do something that would do it justice...and I'm assuming that's how everybody else was approaching it. You really have to get people who are going to...I really busted my butt on it, really hard. I don't know how DC came to their decisions, but I think they did a really good job. And Jim Lee would have been good on it! He would have been really good, but I think he's got his hands full. It strikes me that almost everybody says, "Well, we're not going to make Watchmen." Do you think that kind of reverence for the source material helps or hinders you? It helps and it hinders for me. The way it helps is that it really inspires you to do your best stuff; it gives you the kick in the pants that you need to do your best work, and at the same time (and my poor editor can vouch for this), I got to the point where I was like, "No! This has to be perfect!" and I started to fall a little bit behind. I got to the point where I was like, "No, it's got to be just right!" And my editor was just about to jump out the window. So it was a mixed blessing, but it does tend to do that--it both gets your best work out of you and also in my case makes me nitpick it to death and make sure every detail is just so. How is it different than doing say Superman or Batman? To me, I feel like carrying forth those icons is almost as daunting. I think the great thing about Superman or Batman or Wonder Woman or any of those other iconic characters is that artists and writers tend to bring a bit of their own flavor to it. That's what makes it so exciting to have a certain person on a book is to say, "Let's see how they're going to handle this character." In my case in Watchmen, my thing was to see how much I could blend it seamlessly into the original Watchmen even though this comes before it. I was seeing if I could make this world that I'm building--or that Darwyn and I are building--mesh with the flavor of the book, to make it work so that if people were to read the book that we had been working on and then go and read the original book, I would hope that it would work really well and sort of fit together like a perfect puzzle piece. And it's an interesting book because at the end of the day, she's young and her life is kind of on the upswing, whereas many of the other characters in the Before Watchmen books have already had their day in the sun and their titles are leading to apocalypse. We wanted to give Laurie her own thing--I mean, Watchmen is really a dark book and our book sort of went its own way. It starts out pretty light but it's sort of Laurie's journey into what eventually becomes something dark. And at one point there was a time where comics became so angst-ridden and dark and while there's nothing wrong with that, it's like, "Okay, let's have some dessert!" And I do tend to like to do comics that aren't necessarily light and fluffy but they don't have to be so heavy all the time. I tend to prefer projects like that. Even if it really is heavy, you can add some humor to it. And this is obviously hypothetical, but is this something you'd ever want to do again or do you think you'd had your say in the world of Watchmen? Dan DiDio had said that there's always room to possibly expand on the world of Before Watchmen, and so it kind of begs the question of whether you folks involved might be interested if they were to do that in a year or two years or five. I don't know, I hadn't actually thought about it. I'm still recuperating!

Before Watchmen's Amanda Conner on Finishing With Silk Spectre