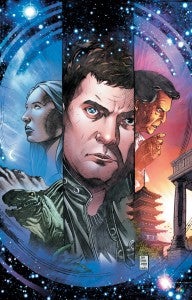 Jhonen Vasquez and Becky Cloonan, two accomplished, celebrated and best-selling indie cartoonists, are used to operating on the fringes of what most would consider "mainstream" American comics. Well, now the pair will be operating on Beyond the Fringe, DC Comics's digital-exclusive comic based on the cult favorite Fox show Fringe. DC announced the move today at its blog, The Source. Vasquez, whose Johnny the Homicidal Maniac comics and Invader Zim TV show both enjoyed a short initial life but fantastic sales as major cult hits outside of the comics direct market, will write the series and Cloonan will draw it. Eisner winner Cloonan is best known for projects like East Coast Rising with the now-defunct Tokyopop and Demo with Brian Wood, whom she met through the Meathaus Collective. Her upcoming minicomic, The Mire, just went up for preorder yesterday and is reportedly set in the same world as (though completely independent of) her previous work, Wolves. According to DC, the comic "alternates every two weeks between 'A' and 'B' storylines. 'A' storylines explore events tied directly to the Fringe show canon, while 'B' storylines take a 'what-if' approach and look at how things might change if certain elements are out of balance." Their run will last two issues, the upcoming 5a and 6a, which seems to suggest that they'll be working in consecutive months on a single 'A' plot rather than alternating between the two. According to ComiXology, the series is usually written by Joshua Jackson, who stars in the TV series, and costs 99 cents for each chapter.