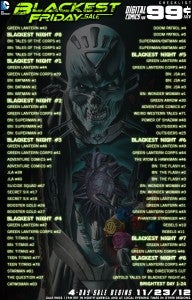 DC Comics has created their own innovative spin on a Black Friday sale. In honor of Black Friday, DC Comics Digital is running a special sale on the Blackest Night series.

The Blackest Night storyline was originally published in 2009 and  2010. Blackest Night was by writer Geoff Johns and artist Ivan Reis. The series focused on Nekron, a personified force of death who resurrected deceased superheroes in an effort to eliminate all life and emotion from the universe. Blackest Night was a nine issue limited series (counting the zero issue), which also carried over into a number of other comics.