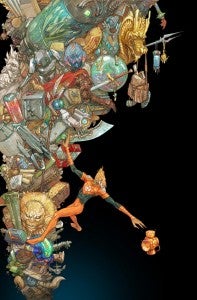 Well, Rob Liefeld told us it was coming.

With a Threshold series in the offing for the near future, DC Comics's Blue Beetle will conclude with January's #16, with an "epic" finale that leads into the book featuring the former Gen 13 and DV8 villain.

That much we knew over the weekend at New York Comic Con. But today in the January solicitations, DC also announced the end of Frankenstein: Agent of S.H.A.D.E., Legion Lost and Grifter, the other three titles that Liefeld tweeted just before the convention might be slated for cancellation before the launch of a fourth wave of New 52 titles which he claimed would include a Superman/Batman title.

No such book has yet been announced, but if the publisher plans to keep their lineup at 52 titles, it will have to add some more books. So far, Threshold, the Snyder/Lee Superman and Justice League of America are the only books announced, but five titles (these four plus the previously-canceled G.I. Combat) will be disappearing.

Because Threshold #1 hits in January, it's safe to call that the "replacement" for G.I. Combat, adding a bit of much-needed genre diversity to a line that's losing both a war and a horror title in the form of a sci-fi anthology book featuring a number of DC's best-loved characters. The end of this title, though, and the positioning of Blue Beetle Jaime Reyes as a spacebound character with ties to the New Guardians, seems ideally timed to set the stage for a potential return of Ted Kord, in accordance with some suspicions raised at New York Comic Con.

It's somewhat surprising that DC didn't take more opportunity to tease upcoming projects at New York Comic Con; while the publisher generally doesn't like to release information on upcoming titles too far in advance of the solicitation text for the first issue, it seems that San Diego and New York are the two shows big enough to provide the kind of launchpad that might subvert that corporate thinking.

Junji Ito Shares Another of His Favorite Horror Icons

Latest Updates on WWE's Queen of the Ring Tournament

One Olympic Athlete Is Channeling Aang with an Airbender Haircut