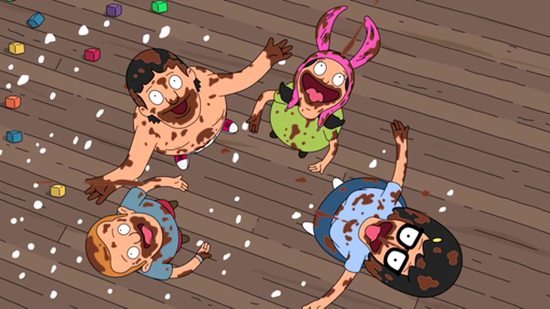 A new episode of Bob's Burgers, titled "The Kids Rob a Train," will air tonight on Fox. The Belchers take a trip on a train and, to their dismay, Louise, Gene and Tina are seated in a separate train car. Never one to follow the rules, Louise ropes the children into helping her on her mission to steal the vast chocolate supply from the restaurant car! Meanwhile, Bob and Linda indulge in some wine tasting and have a "taste-off" with a snobby couple. The voice cast includes H. Jon Benjamin as Bob; Dan Mintz as Tina; Eugene Mirman as Gene; Larry Murphy as Uncle Teddy; John Roberts as Linda; and Kristen Schaal as Louise. Bob's Burgers, "The Kids Rob a Train," airs Sunday, March 30 at 7:00 PM ET on Fox.