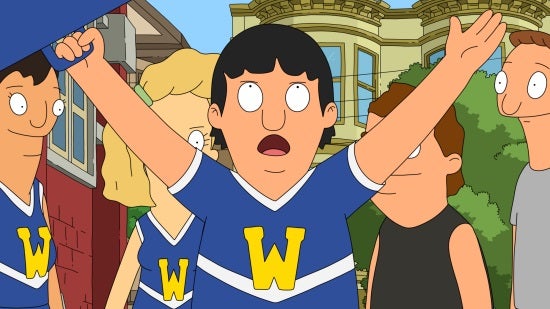 A new episode of Bob's Burgers, titled "Gene It On," will air tonight on Fox. In "Gene it One," Tina decides to try out for the cheerleading squad, but it's actually Gene who gets noticed in the crowd for his spirit and cheering ability. Meanwhile, during her cheer audition, Tina falls and bites her tongue, leaving her unable to speak – and a mischievous Louise steps up to be her translator. The voice cast includes H. Jon Benjamin as Bob; Dan Mintz as Tina; Eugene Mirman as Gene; Larry Murphy as Uncle Teddy; John Roberts as Linda; and Kristen Schaal as Louise. Bob's Burgers, "Gene It On," airs Sunday, May 4 at 7 PM ET on Fox.