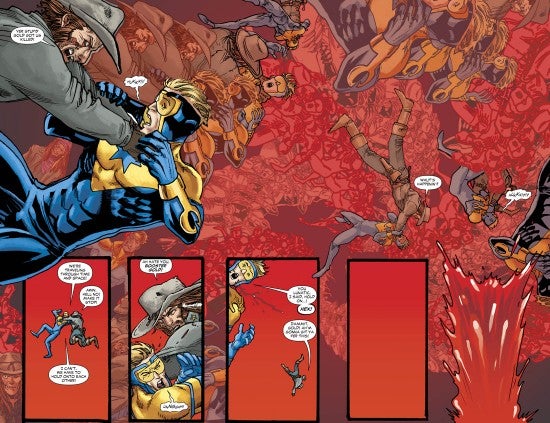 Time-travelers are a rare breed in The New 52, so perhaps it's no surprise that as Jonah Hex returns to the past in an upcoming issue of All-Star Western, he'll cross paths with the guy who brought him to the present day in the first place. It's to that end that series co-writer Jimmy Palmiotti confirmed for Comic Book Resources that we'll see the time-traveling superhero make his first appearance in the New 52 since he vanished in All-Star Western #21. There's been a lot of speculation that Booster would show back up soon, with Ted Kord returning in the pages of Forever Evil and the upcoming, time-traveling weekly series The New 52 - Futures End being partially written and drawn by Booster's creator, Dan Jurgens. The character was expected to play a major role in the DC Universe following the cancellation of Justice League International, the final issue of which was guest-written by DC Entertainment Chief Creative Officer (and incoming Superman scribe) Geoff Johns and featured an alternate look at the first kiss of Superman and Wonder Woman. Rumors of a new Booster Gold series have been persistent, with this reporter witnessing a reporter at Comic Con lobby an editor for the gig (which the editor assured me was non-existent). Along with The Flash, Booster Gold represents one of the only two characters who appear to be actually, physically the same person they were before the New 52 relaunch...albeit with new memories imprinted over the old ones. That's because both of them were traveling outside of time when the wves came through time, changing everything after Flashpoint.