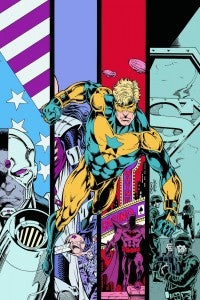 Remember those heady days of the past, when you had to actually go to a retailer and purchase a physical copy of a DC comic book if you wanted to get it on the day of release? Along with the status quo shattering Flashpoint and its many tie-in miniseries, Booster Gold (the only regular monthly title at DC to tie into Flashpoint) was supposed to be coming to Comixology's digital storefront 30 days after the direct market release of its individual issues. After selling out at least two of the four issues of its final arc, though, fans started to notice that the issues weren't hitting on the expected schedule; the first part of the story had landed just fine, but neither the second nor third were available on the first Wednesday after their thirty-day window closed. Once the third part of the book's four-issue "Turbulence" arc (which takes place in the Flashpoint universe) had been released, I reached out to DC to find out: Whatever happened to the greatest hero you've never heard of? Well, according to a representative for the publisher, the comics were added to the release slate for September 14, 30 days (or so) after Booster Gold #47--the final issue--rolled into comic book stores on August 10. This bit of news is actually old to some readers of the DC Comics and Boosterrific.com forum communities, but it doesn't appear that it's been officially announced yet. It's notable not just as an apparent change to DC's plans, but because with a shortened story and no release date yet announced for a collected edition, it's distinctly possible that there will be no collected edition for this sold-out story and that digitally might be the best way for many fans to get their hands on it. So to speak. Upon their release, issues #45, 46 and 47 will join #44, as well as Booster Gold's Blackest Night tie-in issues (#26 and #27) as the only issues of the four-year series to be available for digital purchase. Both Blackest Night issues, as well as at least the first two Flashpoint issues, sold out and went back for second prints. The title itself does not have a page on Comixology, with all of the issues hosted by the "event" pages for their respective crossovers instead. A handful of Booster Gold's adventures can be purchased through Comixology's DC storefront in the form of Justice League of America stories from the Giffen-DeMatteis era and a few stories from the Doomsday!/Death of Superman arc. DC RetroActive: Justice League of America - The 90s #1 was released digital day-and-date in August, and Justice League International #1 came out on September 7 as part of DC's New 52 initiative. Both titles feature the character. Asked whether the bundled release had always been the plan and fans had merely misinterpreted the initial announcement, or whether DC's intentions had changed along the way, DC's representative simply responded, "I blame Reverse Flash."