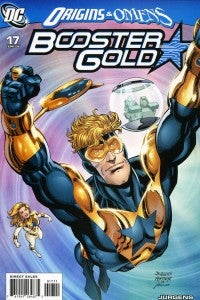 In an interview with IGN at the San Diego Comic-Con International, Booster Gold and Fringe screenwriter Andrew Kreisberg told the network that, despite an apparent lack of forward motion on the "Untitled Booster Gold Project," the pilot is still on track.

Kreisberg told IGN that he's turning in his script next month, and that he's taken the opportunity at Comic-Con to talk to Dan Jurgens, who created the character in the '80s and wrote and drew the majority of Booster Gold's recent series.

"I spent about a half an hour convincing [Jurgens] that I wasn't just some gun for hire--that I was a huge fan of Booster as a kid," Kreisberg said.

He also dropped a little bit of a tease in terms of what version of the Booster Gold mythology would be likely to appear on Syfy when the series launches.

"[Booster Gold] really is the first TMZ superhero, as we say in the show," Kreisberg told the interviewer. "All of the DNA of that character--with Skeets, with Trixie, with Dirk Davis, with his sister Michelle, with Rip Hunter--all of that is in the pilot."

While Rip Hunter was revealed to be Booster Gold's son during the Geoff Johns/Jeff Katz run on Booster Gold, which launched after 52 in 2005 and featured art by Jurgens, some of the other characters Kreisberg mentioned--Trixie Collins and Dirk Davis--haven't appeared in a Booster Gold comic since the 1980s, when the character's first volume concluded during the Millennium crossover. While Trixie went on to appear in an issue of Dan Curtis Johnson and J.H. Williams III's Chase, Dirk never appeared again after the end of the first volume of Booster Gold, which was both written and drawn by Jurgens. It seems likely, then, that the series may feature a modified version of Booster's first-volume continuity, with the relationship to Rip Hunter added in to make it more accessible to more recent fans and because the relationship added so much to both characters.

"Like with Arrow, if you're a new fan, you don't have to be afraid," Kreisberg said, referencing another show he works on. "But if you've been a fan of the character and been a fan of his history, you can see the DNA of the comic book in the show."

Booster Gold TV Series Hearkens Back to the '80s Series