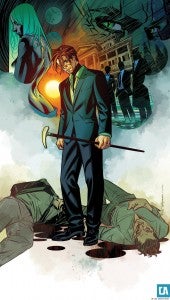 This weekend at Emerald City Comic Con, Boom! Studios will announce the details of a new comic book series by Brian Stelfreeze, reports Comics Alliance. They got first dibs on the first art from the as-yet-untitled series, which you can see at right. A limited run of that image will be available as a print for $20 at ECCC. Stelfreeze will be at the publisher's booth throughout the weekend to sign them. The site didn't offer up any additional details, other than "if you're a Stelfreeze fan, you are going to be both shocked and delighted." Stelfreeze's project is part of the publisher's "I am BOOM!" initiative, which launched at the ComicsPRO retailers organization meeting in Atlanta last week. The initiative has already announced relationships with Paul Jenkins and Mike Carey, but CA notes that Stelfreeze is as yet the only artist. The video below, compliments of CBR, shows Stelfreeze talking about I am BOOM!.