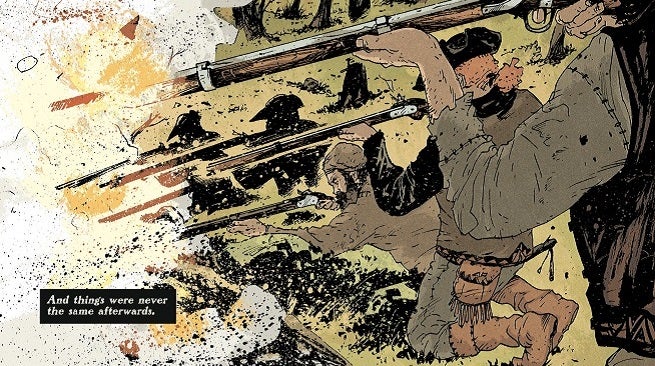 Brian Wood couldn't have picked a more loaded phrase -- "A Well-Regulated Militia" -- for the first arc of his forthcoming Revolutionary War epic, Rebels.

The writer, whose interest in history and politics has been apparent in past projects like Northlanders and DMZ, will launch the series next month through Dark Horse Comics and hopes to do for the American Revolution what Northlanders did for Vikings -- bring a sense of verisimilitude and research to a story that is nevertheless dramatically satisfying.

Wood joined ComicBook.com to talk about the project, its similarities to Northlanders and why he feels getting the story out now is so important.

Obviously, this isn't the first period piece you've worked on. What drew you to this particular era for the story?

A combination of personal interest and the desire to do another historical comics series. The personal interest is very personal - I grew up in Vermont, was raised on a steady diet of local history, and to one degree or another have carried a love, admiration, and a lot of respect for this history my whole life. I think its amazing, and you really need a true love of the material to take on historical fiction. It requires a lot of research to get it right, and also a thick skin from readers who love to point out when you don't! 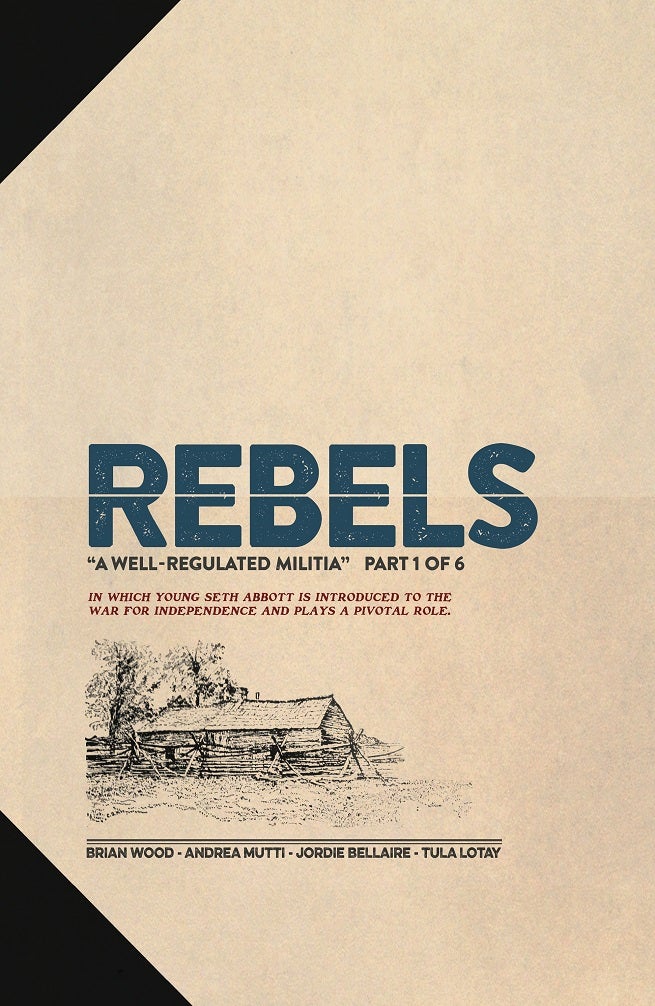 Your collaborators on this project are stellar. How did that team come together?

I've known Andrea and Jordie for awhile, they've both worked with me. Tula is a new collaborator, and I knew her first as a convention organizer, but have watched her post her art and develop into the incredible talent she is. Of course now she's super in demand and all I can get her for is covers, ha ha! I'd love to write a story for her to draw one day.

What can you tell us about the Abbotts?

They live in the woods, literally. A family in a small house in the middle of the forest. The kickoff to the story is the fact this land, which is part of the New Hampshire Grants (Vermont didn't exist as a state yet) and as such is legally theirs, is suddenly deemed the property of Albany, a Loyalist (British) enclave. So a homegrown militia forms to protect their land. The Abbotts are part of this, and its how Seth Abbott, our main character, gets involved in the larger conflict.

Seth aside (He's fictional), this is all historical. Its about the Green Mountain Boys, America's first militia.

Theirs is very much a story embroiled in the War, but how much of the rest of the society will we see? Early capitalism in the US and the relationship with Native Americans and the like are also interesting, but I don't know how broad you want the scope to go.

Well, like Northlanders, my historical series about Vikings, the longer Rebels can go the fuller a picture it can paint. As is typical in comics, I'm contracted to do a year of Rebels. Assuming sales hold up, I'll do another. And so on.

Right now we have the big story about the militia, which is primarily a story about combat, but after that we'll have a series of shorter stories that cover a range of things: the press, a deconstruction of the Molly Pitcher folktale, African Americans in combat, a story about the frontier days - James Fenimore Cooper type stuff, and a one-shot from a Redcoat's perspective.

Like I said, the longer we go, the better the series will be at truly capturing the history. 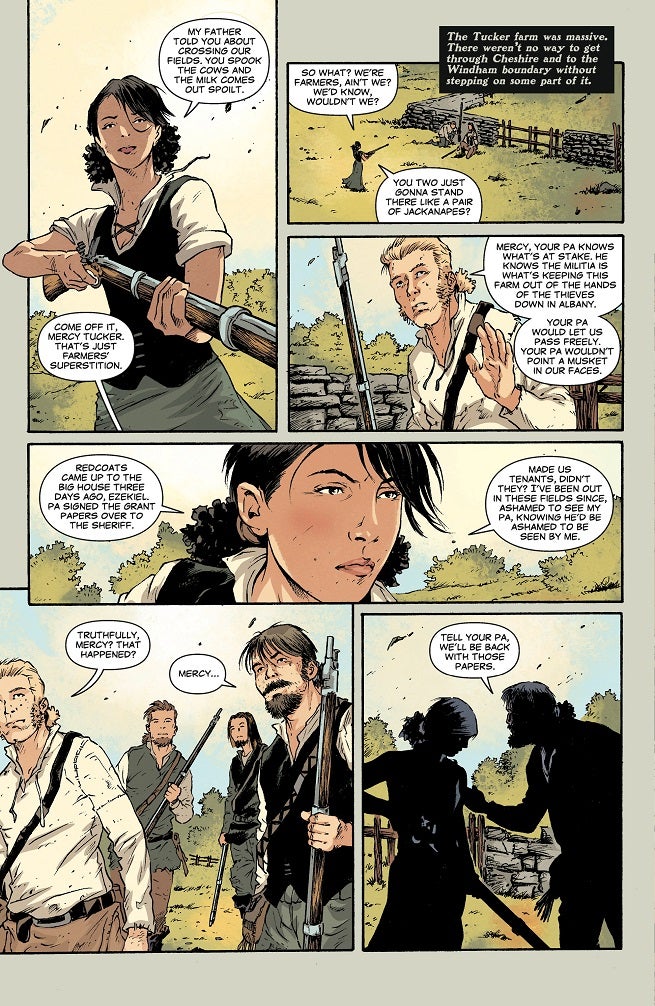 There's a kind of Howard Zinn sensibility to these historical epics featuring everyday people. Is that something you were going for?

Not specifically... I mean, maybe that sensibility is there but I'm really just trying to recreate what I did on Northlanders. Do for this what I did for that. Writing stories like this is tremendously satisfying, it hits all my happy buttons.

What would you say is the trick of balancing the real event with the dramatic need of the characters? Just planning ahead or something more?

Well, the real event always takes a back seat. In my mind it has to... this is fiction first and foremost, so I do what I can to line up with history, but if it comes down to history vs. the story I want to tell, the story wins. I'll likely catch some heat for that, but so be it.

But typically I approach a story with a historical event as a starting point. Like, something set at this battle, or during this siege, or in this place where this thing happened. And then I figure out what my point is and what characters I need to make it, and then the story kicks in and the history is there to support me, to add some depth and context.

And what about balancing the need for commentary on things that are widely misunderstood versus your stated desire to be reverent to the era?

Getting stuff right is a big motivator for me, as has been watching politicians for most of the last decade use this history to sell whatever it is their selling. Mental images of the founding fathers, evocations of the near-spiritual glory that is the Constitution, etc have been appropriated to raise money. With Rebels, I'm aware of this and the way I'm combating that is to merely present things as straightforward as I possibly can, imperfect human as I am. I won't demonize the history any more than I will glorify it. It doesn't need glorification, its pretty great as it is, warts and all. 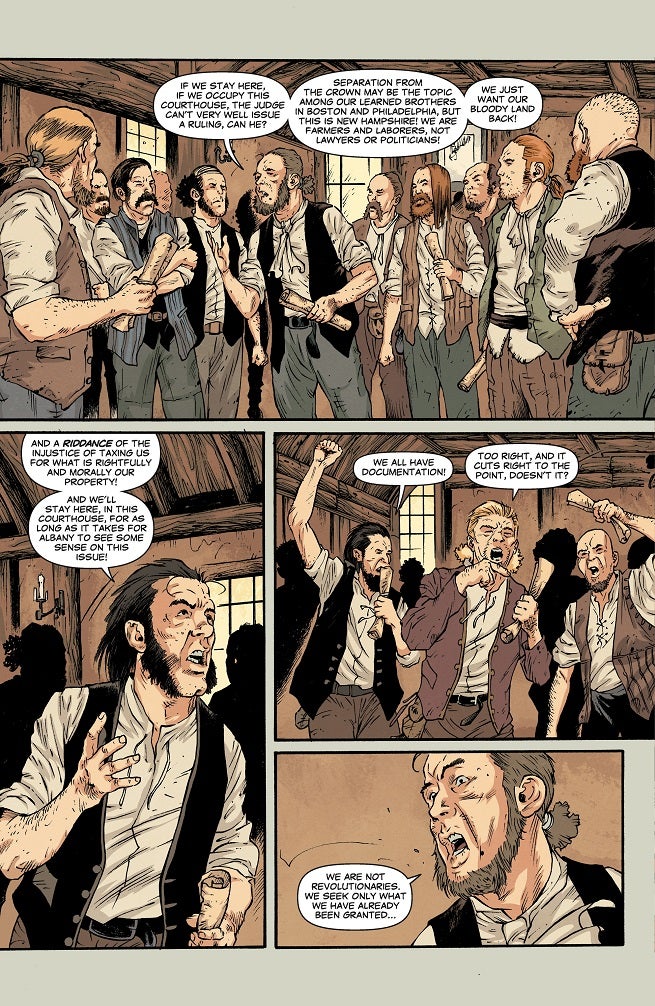 You've spoken about how this book will look at the revolution through the lens of modern sensibilities, but the word "rebels," for many, evokes the Civil War. Are you drawing some through lines that run through US history?

It evokes the Civil War for me too, even now. But its a good title and the best one I could think of to, like Northlanders, contain a whole group of people.

What are the big takeaways that you felt like people should have from US colonial history, that they aren't getting from other media, or from the Tea Party types?

I think we, meaning Americans, should be proud of it. Don't let the fundraisers and the racists and the other divisive types ruin it. Speaking as the guy who wrote DMZ for 6 years, being a patriot and feeling proud of this country and being glad to live here and be a part of it doesn't mean you're throwing your lot in with the extremists. It took me a LONG time to reconcile that in my brain, since as a leftie post-9/11 I had developed an aversion to anything that smacked of patriotism. But I can be a pro-gun control left-winger and still not only be proud of Rebels and all it stands for, I can own it too.

That first Nerdist interview identified Mutti as the series "primary" artist, who would draw most of the book. Do you know yet who else might platoon in?

I think my Moon Knight partner Greg Smallwood is coming on for a guest issue, as is Matthew Woodson, who did a Northlanders issue, as well. I'm thinking I might try and limit this only to people with "wood" in their names.

Obviously you've got a lot of venues open to you. What makes Dark Horse the right home for this particular project?

I tend to be very loyal to editors I connect with, and so I'll always take projects to Sierra Hahn, my editor at Dark Horse. All my major books, meaning long-running, important serials, I'll take to Dark Horse because they have an incredible support system that can nurture a project over years... from PR to design to convention organization and promos and freebies... they do it all better than anyone else I've worked with, and you need that to help sustain a long-running project. And they take risks, which is nice for me, since what I do isn't always the most obvious nerd-genre slam dunks.

What other media are you enjoying? You obviously listed off a handful of things in your initial blog post, including Turn, but have you continued to find more as you do research?

I consume two types of media: historical fiction and historical non-fiction, and to cleanse the palette I read airport thrillers. Kind of a weird mix, but it keeps me sane. I've always read history, I find I get more story ideas from it than from anything else.