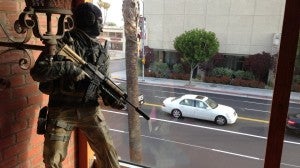 Los Angeles Police today raided the headquarters of game developer Robotoki and reportedly almost opened fire on a realistic statue of a video game character who stood in the building's window brandishing a realistic-looking assault rifle. "Our studio is equipped with a 'panic' alarm in case of an armed threat, which was installed yesterday," studio founder Robert Bowling told Polygon. "One of our designers, who shall not be shamed, pressed it on his way out because apparently when boys find buttons that they are unsure of, their first instinct is to push it." Apparently as a result, the building was surrounded, police stormed in and took Bowling out in handcuffs, and then they cleared the building floor-by-floor, standing off briefly with the statue before realizing that it was...well...a statue. Bowling didn't find this out until they emerged, laughing, to tell him the story, and didn't know it was his developer's fault until they reviewed security tape to find out what had happened. No charges were filed or fines issued.

Only Murders in the Building Season 2 Gets Poster and Teaser