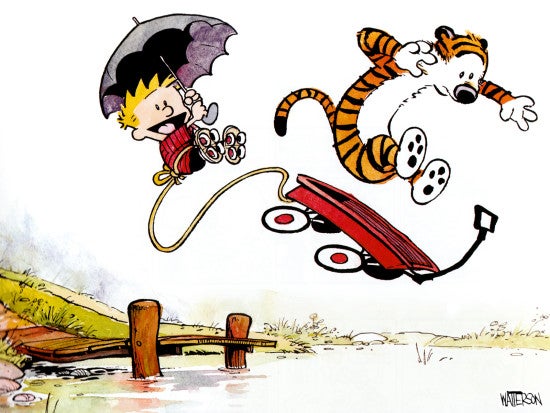 Not long ago, ComicBook.com shared with our readers a short YouTube video from Ugly Americans animator Adam Brown (embedded below), showing off a minimalist approach to animating a classic Calvin and Hobbes strip that many fans and entertainment press-types told him he ought to bring to the attention of the strip's creator, Bill Watterson. Watterson has resisted attempts to merchandise Calvin and Hobbes over the years, and doesn't authorize products or other-media interpretations (no, shockingly, not even those decals of Calvin peeing on things), and so Brown never communicated a sense that the animations could go anywhere, although he did tell fans that he might try some more, just for fun on his YouTube page. In a rare interview coming up in the December issue of mental_floss, though, Watterson was asked about these YouTube homages (by Brown and others), and said that he doesn't put much stock in them. "I rather doubt the aim of these things is artistic development," Watterson said. "I assume they're either homages or satiric riffs, and are not intended to be taken too seriously as works in their own right. Otherwise I should be talking to a copyright lawyer." He isn't, though, just as he hasn't with the aforementioned decals, which seemed omnipresent during the 1990s and the first decade of the new millennium. And while those guys might not be taken too seriously, the writer asked, what about a major animation studio like Pixar, who might have interest in taking up Calvin and Hobbes if Watterson were ever to be amenable to such a thing? "The visual sophistication of Pixar blows me away, but I have zero interest in animating Calvin and Hobbes," Watterson told mental_floss. "If you've ever compared a film to a novel it's based on, you know the novel gets bludgeoned. It's inevitable, because different media have different strengths and needs, and when you make a movie, the movie's needs get served. As a comic strip, Calvin and Hobbes works exactly the way I intended it to. There's no upside for me in adapting it."

Calvin and Hobbes Creator Watterson: "I Have Zero Interest in Animating" The Strip