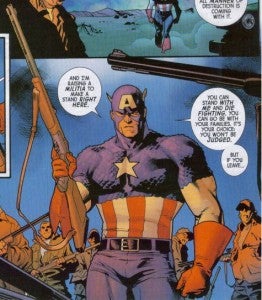 While the recent trend in comics has been superheroes leaning toward the left-wing side of politics, Marvel Comics has taken a decidedly right-wing turn with Captain America. If you haven't read Fear Itself #6 yet, be warned that there are some spoilers below. In Fear Itself #6, Captain Americagrabs a rifle and announces that he's raising a militia. Captain America goes on to tell a group of armed men, "You can stand with me and die fighting. You can go be with your families. It's your choice: you won't be judged. But if you leave…leave your weapons. I'll need 'em." Of course, Captain America was a World War II soldier, so it's not like he's never used a gun in the past. Even the recent Captain America: First Avenger movie showed Captain America using firearms, but Steve Rogers has rarely used a gun in the comics in modern times. When Bucky Barnes temporarily replaced Steve Rogers as Captain America, a big deal was made over Bucky carrying a gun.