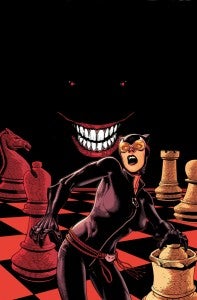 Move over, Anne Hathaway! This fall, there will be a new woman being associated with Catwoman in the minds of Bat-fans everywhere when Ann Nocenti takes over writing the comic with September's #0. This announcement, made at DC Comics' The Source blog earlier today, flies in the face of earlier solicitation text that reported the #0 creative team as being led by Judd Winick, the writer who tackled the series' first twelve issues. Pictured at left is the cover to Catwoman #13, the first non-flashback issue in Nocenti's run and--by the looks of it--part of the previously-teased return of The Joker to the world of the New 52.

Catwoman Gets a New Writer in September

Buffalo Wild Wings: How to Get Free Wings for the Super Bowl