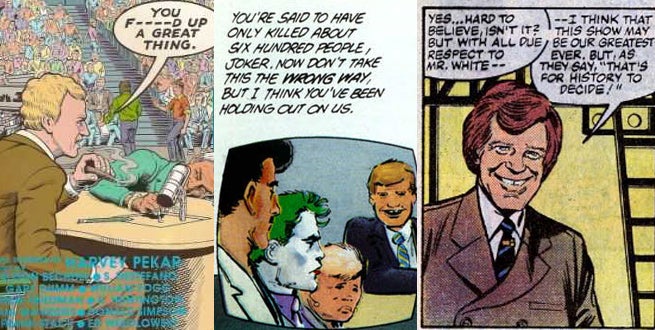 David Letterman's run as a late night host has come to an end. As Letterman makes his final Late Show broadcast this evening, his legacy will live on in many ways, from the concrete; current hosts from Jimmy Fallon to Jimmy Kimmel call him an influence, to the ethereal; memories of classic sketches, interviews, and laugh-out-loud moments that will never fade.

Of course, for big-time Letterman fans who wish to keep that particular candle burning, the ubiquitous host has also appeared in many comic books over the years. Here are five of the hosts biggest and best four-color appearances. 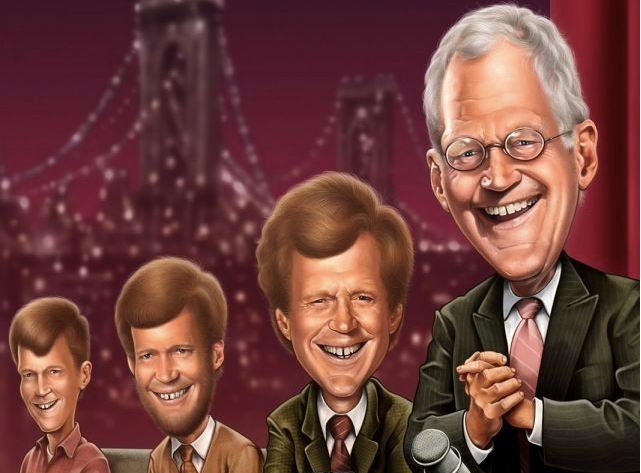 If a person has been a celebrity – even a mild one – Bluewater Productions has probably made a comic book biography of their life. This comic book, written by C.W. Cooke and drawn in boardwalk caricature style by Noumier Tawilah, is exactly as advertised: The story of David Letterman's life. The story covers the breadth of Letterman's story, starting from his early years to becoming the King of Late Night. It's not so much a narrative tale as it is an illustrated encyclopedia entry, but fans wanting to know more about Dave's life and evolution into an icon can enjoy the issue. It's readily available on comiXology and back-issue bins. 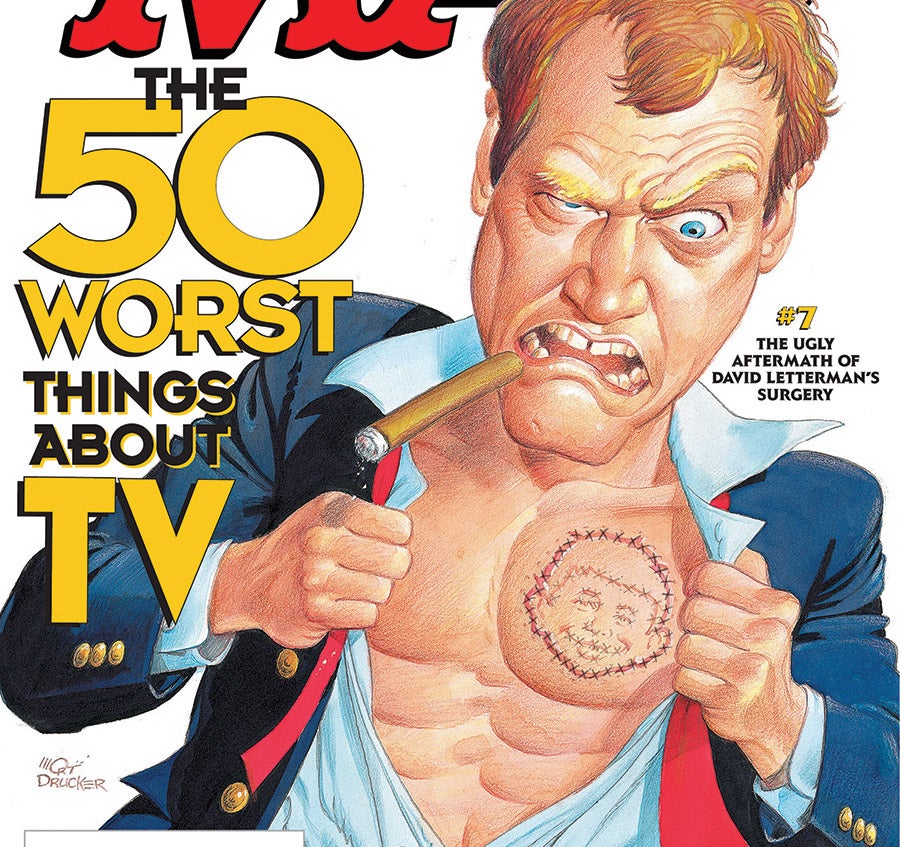 Not technically a comic book, but more than just any old magazine, MAD is credited as influencing hundreds of current comedians and actors. The zany publication from DC Comics, which gives an irreverent look at literally any topic, pop culture piece, or yes – famous person, has made generations laugh at the sometimes ridiculous, sometimes ugly world around them. MAD has satirized Letterman many times, but as a tribute to the usual gang of idiots, we chose issue #396 for two reasons: MAD already pegged it as their favorite, and David Letterman looks like a baws on it – just look at those abs!

While Jimmy Kimmel is content to just host the actors that play Earth's Mightiest Heroes, Letterman has met the Avengers themselves in this 1984 issue of Marvel Comics' The Avengers, titled "Late Night of the Super-Stars," written by Roger Stern, and drawn by Al Milgrom and Joe Sinnott.

The eclectic line-up of the time, featuring Hawkeye, Mockingbird, Black Panther, the Beast, Black Widow, and of course Hollywood star Wonder Man (to resemble some form of sense) went on Letterman's Late Night as guests. Of course, a supervillain fight broke out – and David himself wound up helping save the day. Also, there's Paul Schaffer in a Captain America t-shirt. 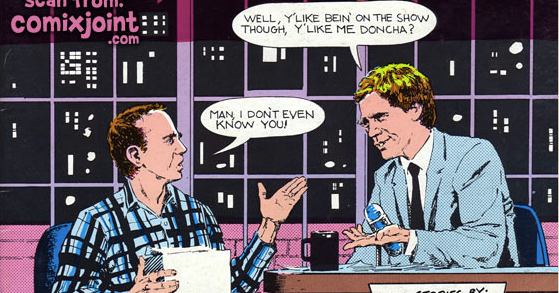 In a beautiful synchronicity, David Letterman had Harvey Pekar, the award-winning legendary creator of American Splendor and other comics, as a guest on his show several times. Since American Splendor was an autobiographical comic, Pekar returned the favor by immortalizing Letterman and writing about his Late Night appearances in the series. We're giving the first appearance the nod here, but we'd be remiss not to mention American Splendor #14 as well, since it features Letterman dropping the F-bomb on the cover. In fact, the issue blatantly labels itself "The David Letterman Exploitation Issue." 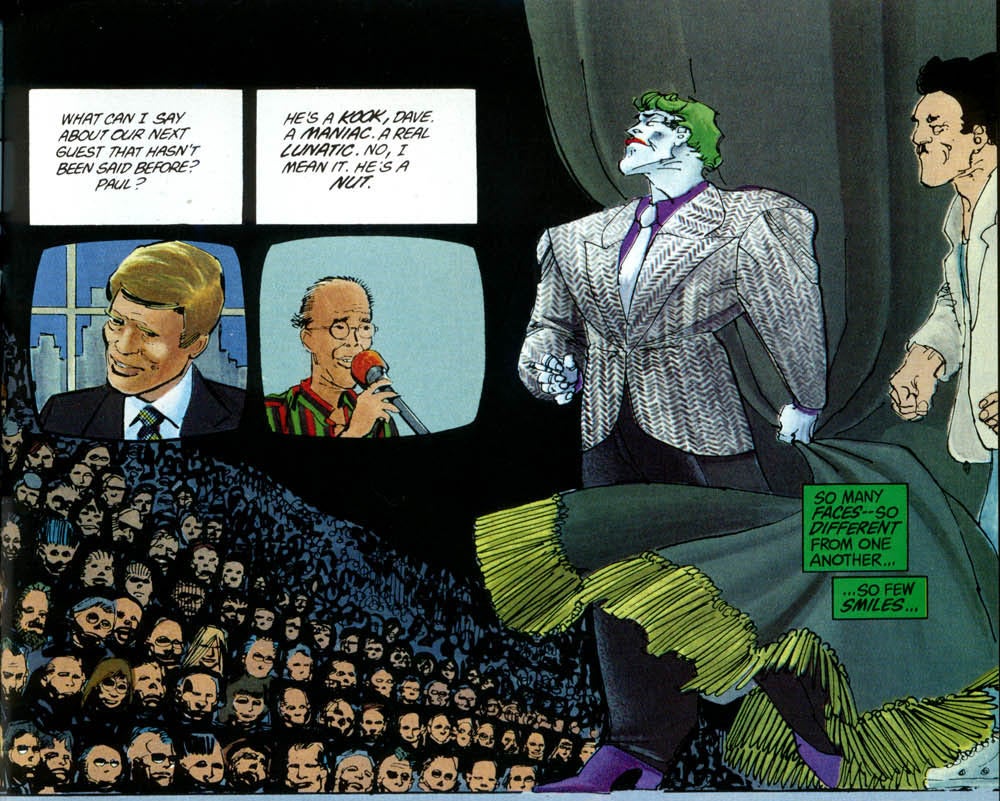 Frank Miller used a lot of parody and satire in The Dark Knight Returns to make the Batman and The Joker's final battle occurred in the real world. When the Joker escapes captivity, he decides to appear on Late Night with … David "Endocrine." The host and his band leader appear in the pages with dialogue that reads like a transcript of their trademark banter, and likenesses that shake out as very strong or kind of wacky depending on the panel. The Joker, after answering a couple of questions, kills a parody of Dr. Ruth by kissing her with toxic lipstick. Then, he makes good on his promise to "kill everyone in this room," by gassing them with Joker venom, leaving smiles on Dave's audience – and presumably (though not shown on-panel) the host himself, for all time.

What are your favorite David Letterman comic book appearances? Let us know below.